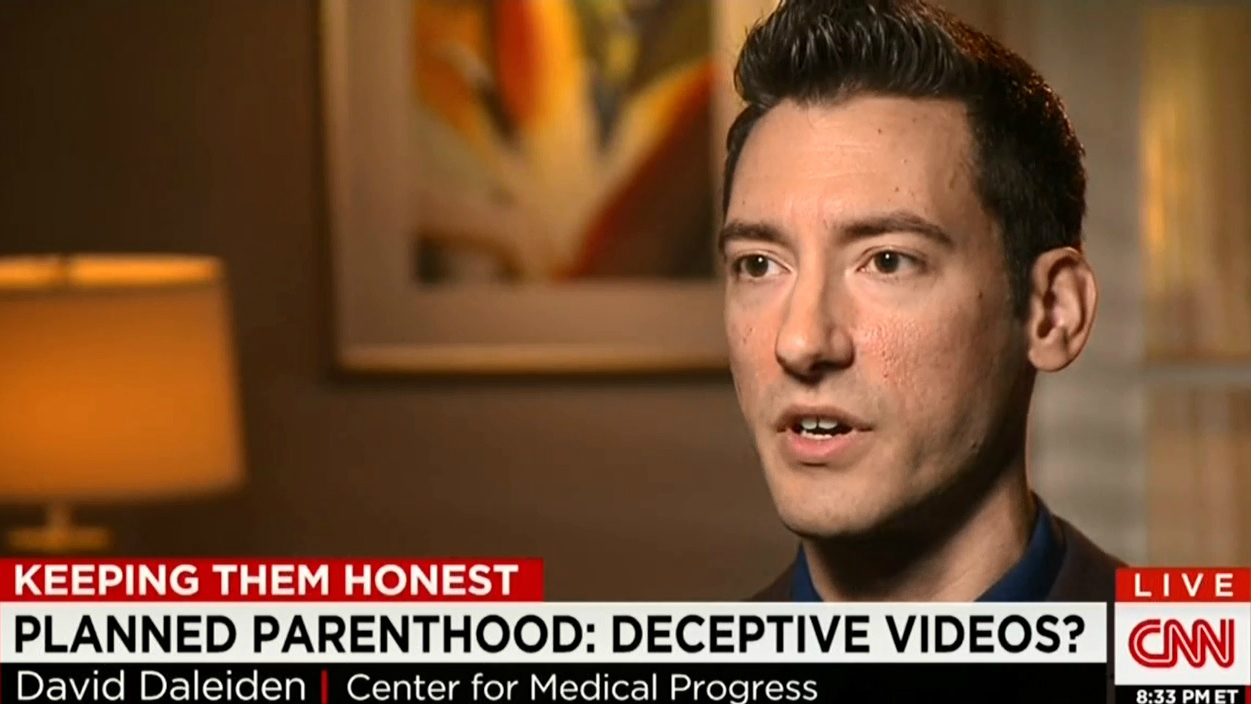 When it comes to editing and video production, the Center for Medical Progress is “more transparent” than CNN, according to the maker of the undercover Planned Parenthood videos.

During Anderson Cooper 360 on Oct. 19, CNN’s Drew Griffin interrogated Center for Medical Progress (CMP) Project Lead David Daleiden over his videos exposing Planned Parenthood’s harvesting of aborted baby parts. In the (edited) interview, Griffin tried to discredit the videos with what he saw as “very deceptive” and “sloppy edits.” Afterwards, Daleiden told the Media Research Center that CMP “is exponentially more transparent” than CNN itself.

In a statement to MRC Culture, Daleiden commented on the irony that “CNN, along with many in the media, used their news segment to criticize the video production at CMP when their own broadcast was filled with numerous cuts, edits, and voiceovers.”

“The fact is,” he continued, “CMP is exponentially more transparent than CNN or any mainstream network about our production decisions by posting both the summary videos of the conversations with top-level Planned Parenthood officials, and the full footage of those conversations.”

“It will be interesting to see whether CNN will be as transparent as CMP and post the full footage of their interviews with me and with Dawn Laguens," Daleiden added.

Griffin himself appeared to use the same tactic. 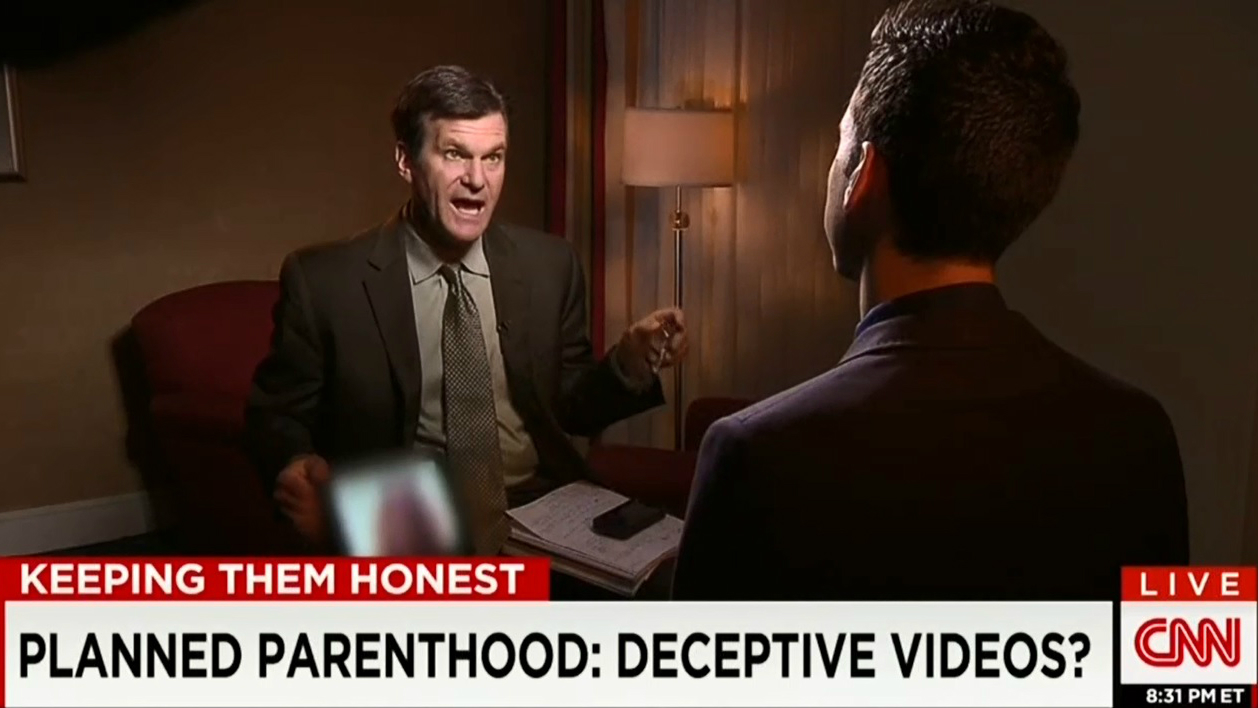 Griffin noted that while O'Donnell described holding an aborted baby in her hands, the video showed a picture of a different baby. Because of that, he deemed the image a “problem.”

The CNN correspondent then seemed to try discredit all of Daleiden’s work because of the “very deceptive” picture as well as video footage of another baby he inserted in another video – moves Griffin called “sloppy edits.”

CNN chopped and spliced Daleiden’s interview – and even drowned out Daleiden’s voice so that Griffin could say in a voiceover, “That is not true.”

At one point, Daleiden countered Griffin's claims by calling out the media:

“The only people who have raised that criticism are — first, it started with Planned Parenthood and their allies, and some of the pro-abortion blogs. And then, it migrated to some of the mainstream media outlets. But apart from that, no one else has seemed to be confused by it or deceived by it.”

Between Cooper and Griffin, CNN uttered the word edit (“edit” “edits” “editing” “edited” or “unedited”) 13 times, according to Nexis.

DREW GRIFFIN (on-camera): So we hear Holly talking about holding this baby.

DAVID DALEIDEN, CENTER FOR MEDICAL PROGRESS: Holding a baby, yeah, that was born alive in a Planned Parenthood clinic, yeah.

GRIFFIN: Is that this baby?

DALEIDEN: No, no. That's just an illustration of the — of the same age — the same gestational age fetus.

GRIFFIN: The problem people are having is, that this is not an aborted child, and this is not the baby that Holly is talking about, and that seems very — that does seem very deceptive to me.

DALEIDEN: This is a late second trimester intact fetus, which is exactly the kind of fetus that Holly O'Donnell is describing holding. And why—

GRIFFIN: Except this isn't that example. This is a stillborn child....and doesn't this leave the door wide open for the critics who want to — who you knew are going to come after you?

DALEIDEN: The only people who have raised that criticism are — first, it started with Planned Parenthood and their allies, and some of the pro-abortion blogs. And then, it migrated to some of the mainstream media outlets. But apart from that, no one else has seemed to be confused by it or deceived by it.

GRIFFIN (voice-over): That is not true. The confusion of David Daleiden's sloppy edits has made its way into the Republican presidential race.

GRIFFIN: In the second Republican debate, an impassioned Carly Fiorina made this attack on Planned Parenthood — citing this video clip of another baby in Daleiden's documentary, again with Holly O'Donnell providing the narration.

O'DONNELL (voice-over): Its nose was very pronounced. It had eyelids. And its mouth was pronounced. And then, since the fetus was so intact, she said okay, well, this is a really good fetus.

DALEIDEN: Not just an image — a video.

GRIFFIN: Where did it come from?

DALEIDEN: That video is from an organization called the Center for Bioethical Reform. They are one of the largest repositories of abortion images and abortion videos in the world, I think—

GRIFFIN: So you don't know where that came from?

GRIFFIN: Or the date?

DALEIDEN: I don't know the exact location or the date. I know that that's footage from CBR from their abortion images archive.

GRIFFIN (voice-over): The Center for Bioethical Reform would not release any detailed information either. The center claims it was an aborted fetus, and that they paid for the video.

GRIFFIN (on-camera): This is — this is actually what Carly Fiorina was talking about, right? This is that video. But you can't tell me right now if this was even at a Planned Parenthood facility.

DALEIDEN: It doesn't matter; it doesn't matter. It's only there as an illustration of the sort of born-alive, late-term fetus that Holly O'Donnell is talking about.

DALEIDEN: Right; right. And that's — and this specific sequence right here with Holly O'Donnell is talking about an infant that was born alive in a Planned Parenthood clinic that they then harvested the brain from. And so—

GRIFFIN: Only, once again, not this baby.