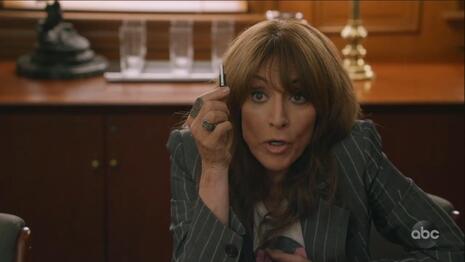 The series follows a class action lawsuit filed against a medical equipment company that manufactures and sells an artificial valve used in heart patients. Several patients have died or gotten sick after receiving this device due to poisoning from the coating used in the manufacturing process. Each episode builds on the previous one, from the beginning of filing the lawsuit and it ends with the trial.

Annie Flynn Ray Bello aka "Rebel" (Katey Sagal) is drawn into the case by Helen Peterson (Mary McDonnell) and her pregnant daughter, both of whom have the valve. Helen is dying and her daughter’s baby dies shortly after birth. The other people in the class action lawsuit are equally tragic. The problem is that most patients do not die from the device, their lives are saved. This makes the class action lawsuit’s demand that the device be taken off the market an overreach.

As the court date arrives, the medical equipment company, Stonemore, led by CEO Mark Duncan (Adam Arkin) employs a female fixer who arranges for witnesses to turn up missing. The idea is to paint Stonemore with the broadest brush, with the implication that Big Pharma is evil. The scientist who created the device’s coating eventually has a mental breakdown due to guilt over the deaths and the fixer drugs and kidnaps him on the day of the trial.

Rebel’s boss is the attorney she gets to represent the people in the class action lawsuit, Julian Cruz (Andy Garcia), whose wife died after receiving the valve. One of Rebel’s two ex-husbands is the lawyer representing Stonemore and their daughter works for him. The characters on all sides are all intertwined and properly inclusive - Rebel's sidekick, her second husband, and their daughter are all black, she has an adopted Latina daughter, and Cruz has a trans son.

In the grand finale, Rebel discovers a thumb drive with all the information needed to convict Stonemore. The scientist took copious notes after he realized the dangers of going to trial as a witness. It is discovered that Stonemore ran tests on healthy prisoners who were implanted with the artificial valve in a private prison that Duncan is on the board of, thus increasing the level of evil and profiteering.

Cruz: Your Honor, one moment, please.

Cruz: One second, Your Honor. Ah. Yeah. Thank you so much for coming out. Sorry, Your Honor. I have some new information. Your Honor, this is my client advocate, Ms. Annie Flynn Ray Bello, and next to her is the Assistant U.S. Attorney, and they have proof that Stonemore Medical has been testing their valves on healthy prisoners in a private prison in violation of all medical ethics and numerous state and federal laws, and in light of that, I'd like to give Mr. Ray one last chance to settle. And you're right. I don't bluff.

Duncan: Look, Karsten Vokelberg is manic on his best days and deranged on his worst. He was obsessed with the idea that the valve was causing harm, but he had no hard evidence. If he ran some sort of illegal trial, that is on him.

Rebel: Yeah, he knew you were gonna say that.

Rebel: He also knew that you would destroy any trace of any conversations you had with him, so he kept copious records. E-mails, voicemails, communication with you or anyone in your company. He kept it all.

Duncan:  I approved a limited trial to put his mind at ease, okay? I was told that it was only gonna involve prisoners that could potentially benefit from the valve and only on a voluntary basis.

Cruz:  Ever the altruist.

Rebel: Dozens of prisoners with healthy hearts were implanted with the Stonemore valve in exchange for recommendation of early release. You sit on the board of that private prison, Mark. Doesn't look so good for you.

Cruz: $600 million, plus you pay for every plaintiff to have their heart valve removed and all their follow-up medical care in perpetuity. Plus, you remove that God forsaken torture device that you call a heart valve off the market permanently. $600 million.

Ray:  I need a moment to confer with my client.

Cruz: Confer all you want, but every minute that you take, my number goes up, because the alternative is we're gonna go back into that courtroom, I'm gonna put Annie on the stand, and I'm gonna let the jury hear what a murderous scumbag your client is. You're out of moves, my friend. $600 million.

Rebel: You're going to prison, Mark, for a really long time.

This random discovery forces Stonemore to settle the case and end the trial. The company agrees to a $600M settlement, plus medical care, and Rebel wins another victory against the big, greedy corporation profiting off poisoning people.

But Rebel lost against the big, greedy corporation (ABC) profiting off poisoning people's brains - the show has been canceled.