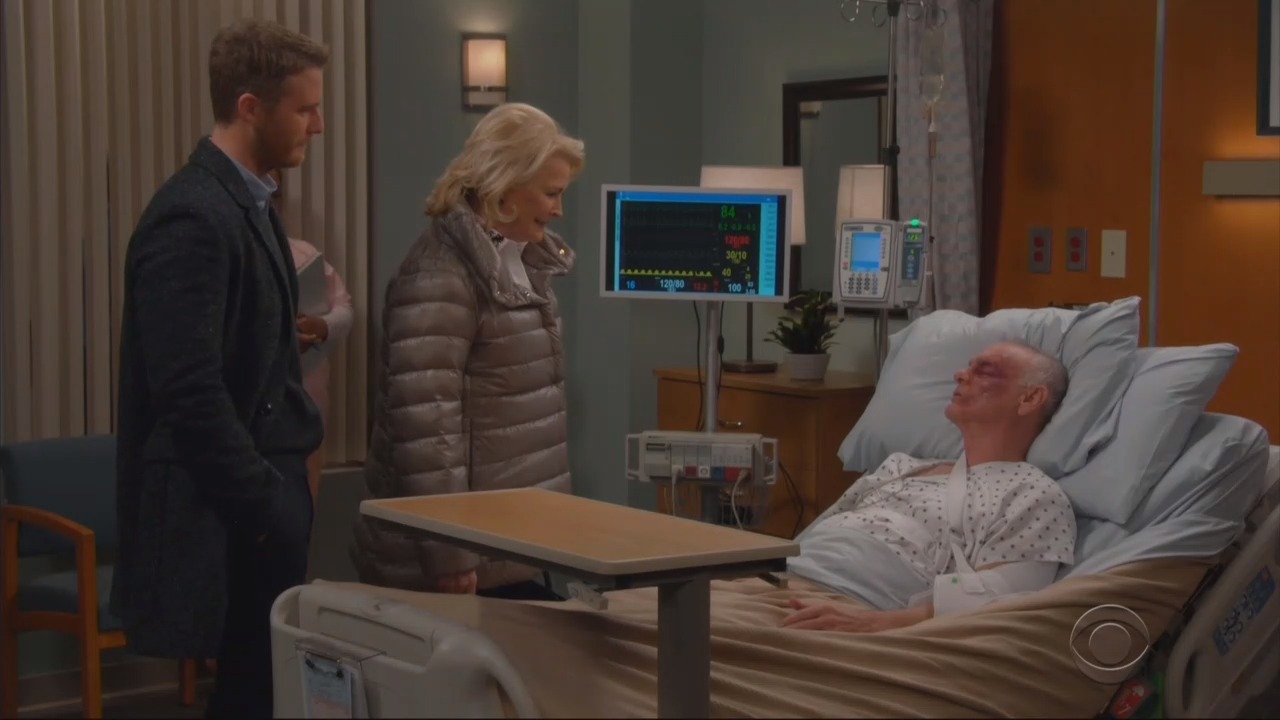 It’s not every day that I hear an actor playing a journalist recite a line that compares covering presidential rallies to covering Libya but this is 2018 and it’s Trump’s America. In the November 29 episode of CBS’s Murphy Brown, reporter Frank Fontana is attacked at a Trump rally and the blame falls on President Trump saying the press delivers fake news and is the enemy of the people.

In “Beat the Press,” Murphy (Candice Bergen) closes her morning show with a shot at President Trump, which is nothing new. She promotes a piece she’ll be doing on the next day’s show and describes it as a look at the troubled relationship between President Trump, Canadian Prime Minister Trudeau and French President Macron. She says it would be a great screwball comedy and could be called “Two Men and a Baby.” When her producer Miles calls her on her snark, she says it’s like she had Tourette’s Syndrome. Ugh.

That evening Frank (Joe Regalbuto) does some in the field reporting at a Trump rally in Pennsylvania. Murphy and her son Avery (Jake McDorman) watch the rally on television together. During the rally, President Trump mentions Murphy’s show and that he heard that Frank was in the press pool. He nicknames him “Fibbin’ Frank Fontana.” Trump even asks if maybe Frank needs a body slam.

Murphy: You know, your Uncle Frank is in here somewhere.

Trump: And by the way, anybody catch Old Murphy on TV this morning?

Trump: Yeah, she was at it again. Sitting there with her flunky friends, telling their big lies, planting their fake stories about our great country.

Avery: Is that what you do? You paint a much different picture.

Trump: I hear Old Murphy's partner in crime, Fibbin' Frank Fontana is here tonight. Where is he? There he is. See him? That's right. Let Fibbin' Frank know what you think of him! Maybe a good body slam, what do you say?

When Frank left the press pen after Trump left the stage, the story goes, he was attacked by "a sea of red hats,” causing him to be airlifted back to Washington, D.C. Visiting Frank in the hospital, the team sees that Frank has broken ribs and a badly injured eye.

Murphy: I guess when you major in journalism these days, you have to minor in kickboxing.

Murphy: What happened to you? I thought you knew how to duck.

Frank: You should see the other hundred guys. How bad do I look?

Murphy: Not bad, if you're a piñata.

Avery: So, I guess the takeaway here is, next time you cover a rally, hope the president doesn't give you a shout out.

Frank: When Trump left the stage, I decided to leave the press pen and go interview some of the people. Next thing I know, I'm surrounded by a sea of red hats.

Frank: No big deal. I'm just milking this for the Jell-O and sponge baths.

Murphy says they are "all sitting ducks" now. So, Corky (Faith Ford) pulls out her gun from her purse and shows it to the rest of the group. Murphy is aghast, being the anti-gun liberal that she is, but Corky explains she is a responsible gun owner. Later, after receiving a few anonymous crank calls on his cell phone, Miles asks Corky to walk him to his car as they leave Phil’s bar.

Avery goes to Pennsylvania to talk to some of the people who attended the rally to hear their stories. He tells Murphy that his employer, conservative Wolf News, will give him cover - "I am a Wolf Network guy. I think that offers me some protection in red hat country." Naturally, these folks are painted in the worst light. Then a woman, allegedly the one who threw the first punch at Frank at the rally, hauls off and punches Avery.

And, to end the episode, Murphy does a story on homelessness in America (because homelessness is only a news story if a Republican is president) but backs off confronting the Trump cabinet member in her interview. She now feels uneasy about aggressively confronting a conservative and fears retribution.

Wrapping up a welcome back get-together with his co-workers, Frank and Murphy speak about being afraid in America to be a reporter. And, then a comparison is made to Libya. Yes, Libya.

Murphy: What do you think, Mr. Party Animal? You ready to roll?

Frank: Sure. Unless you want to just hang for a couple more minutes. I mean, we really didn't get a chance to talk at all tonight.

Murphy: You're not ready, yet. Right, Frank? 'Cause if you're not, no one would blame you.

Frank: Hey. I've been in scary situations before. Remember Libya?

Murphy: Yeah, you were roughed up pretty well there, too.

Frank: But I filed that away under "Bad stuff that can only happen in another country." But I'm home, Murph. This is America, and......I don't feel safe here anymore.

Murphy: You know, we spent the last five days in the hospital room. Never during that time did I have any idea you were afraid.

Frank: If this is the way it's gonna be...I-I'm not so sure I want to do it anymore. It's a different profession. No one would ever call Huntley or Brinkley enemies of the people. And the worst part is, the other morning on the air -- You soft-peddled that interview. I saw it.

Murphy: I can't believe I did that. I mean, what happens the next time I get ahold of a big story that someone in a position of power might not like?

Frank: Okay. Thanks, Phyllis. This party is exactly what the doctor ordered.

This show continues to insult conservatives while never offering any criticism of liberal America. It looks like poor ratings may be taking a toll. The rumor is that the show will be canceled, though the show’s creator is disputing the story. We’ll know by Spring, 2019.