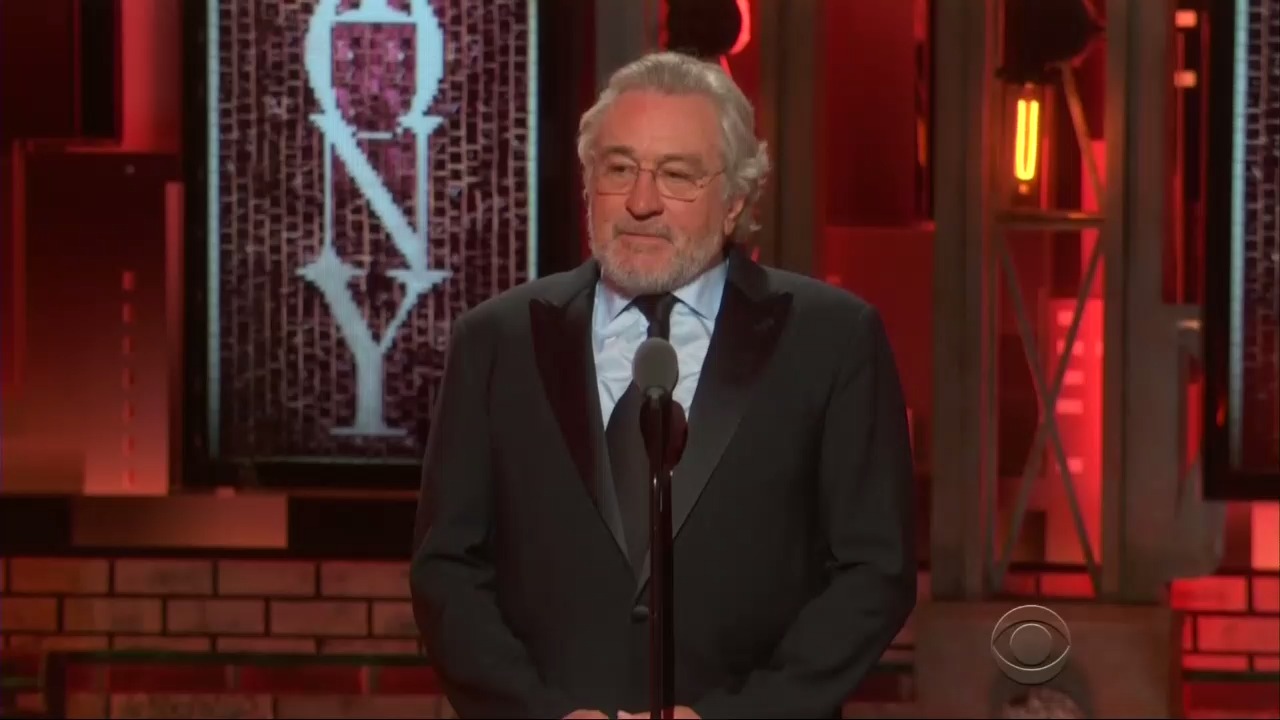 These days, what’s an awards show without some politics mixed in, right? The latest example happened June 10 during the 72nd Annual Tony Awards on CBS, honoring the best on Broadway. The three-hour show started off relatively tame in comparison to some of the Hollywood extravaganzas but nonetheless, they persisted.

Robert De Niro came out to introduce singer Bruce Springsteen but first delivered his own message. It was a vulgar reference to President Trump and it was quickly bleeped out by CBS. As a viewer at home, I couldn’t tell what he said but the audience stood and cheered him on.

According to reports, he said, “I’m gonna say one thing, fuck Trump!" and “It’s no longer ‘Down With Trump,’ it’s ‘Fuck Trump.'”

Aside from that, the most blatant political display was that of Tony Kushner as he accepted the award for the Best Revival of a Play, Angels in America. Among the three dates coming up he wanted to mention, one was November 6. Yes, the mid-term elections. He wants to make sure that the right to vote is protected. And, he wants the mid-terms to heal our country, heal our planet. That’s quite a tall order.

Rufus Norris: Thank you, thank you. Thank you to everyone involved in the Tonys. For the National Theater to bring this particular American classic back home and to be so honored is a real privilege. Credit must go to Tim levy and Jordan Roth, our producers, all our co-producers, an absolutely extraordinary cast, an amazing creative team, the gang at the Neil Simon, the one and only unique Marianne Elliott who so exquisitely has honored the writing of the greatest Tony in the house and that is Tony Kushner.

Tony Kushner: So I want to talk briefly about three dates. Five weeks until July 15, five weeks left to see this gloriously alive production written by this magnificent director, of this play, that is half as old as I am. That is the first. Second date, 21 weeks until November 6th, mid-term election. 21 weeks to make sure, 21 weeks to make sure that the right of citizens to vote is protected and exercised. 21 weeks to save our democracy and heal our country and heal our planet. And what kind of a homosexual would I be if I didn’t say it’s June 10th. Happy birthday Judy Garland.

The very first award, presented was to the Best Leading Actor and it started the ball rolling. Actor Andrew Garfield won for Angels of America and gave a shout-out to the LGBT community. Then he took a little swipe at the recent Supreme Court decision to allow a small business owner in Colorado the freedom of practicing his religion. The baker turned down the request of a gay couple to bake their wedding cake. So, Garfield said, “Let’s just bake a cake for everyone who wants a cake to be baked.” Not real deep thinking, but the message was delivered.

There was a performance by the drama department of Marjory Stoneman Douglas High School. The school in Parkland, Florida, you will remember, was the scene of a mass shooting by a disturbed student. The Director of the Drama Department, Melody Herzfeld, received an award for Excellence in Theatre Education for sheltering 65 students in a small office for 2 hours that day. Fortunately, we were all spared any diatribes about gun violence or anti-NRA screeds.

I enjoy theatre. I especially enjoy musical theatre. For that reason, the show is tolerable for me because of the performances throughout the evening. The smug, self-congratulatory tone wasn’t so entertaining, though. Only in their little Broadway bubble are these folks better than anyone buying a ticket to see one of their plays. Maybe one day that message will be delivered. How does cursing the president, duly elected by half of the country, bring about the unity and love that all these Broadway people preach?