DREAMer on CBS Show: 'We All Belong Here,' L.A. is a Sanctuary City 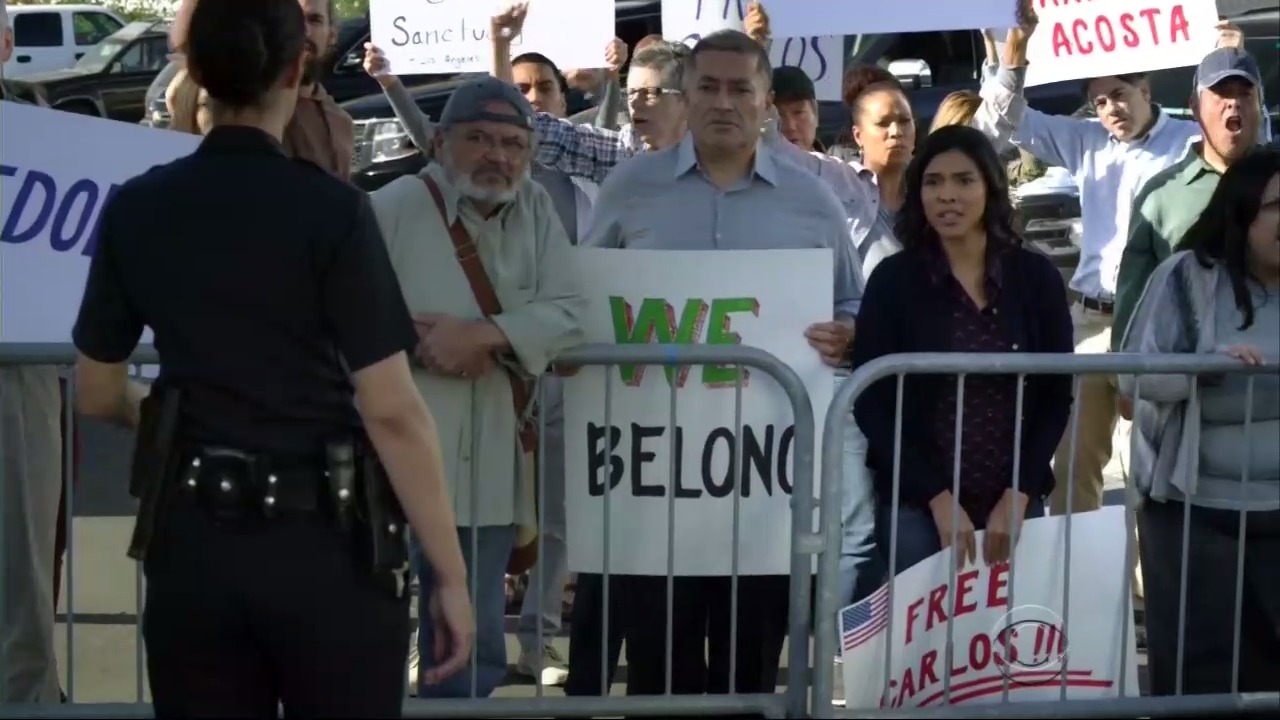 In the March 1 episode of CBS’s S.W.A.T. titled “Fences,” Hondo and the team find themselves in the middle of the immigration debate in Los Angeles. Given the hot-button issue of DACA, naturally, a DREAMer was spotlighted along the way.

The S.W.A.T. team is called into action to assist with an ICE raid targeting a gang leader in Van Nuys. After a bit of grumbling, since Los Angeles is a sanctuary city and has a “hands-off” policy in enforcing immigration law, department Commander Robert Hicks (Patrick St. Esprit) sends them on their way.

During the raid, one non-gang member is arrested among the bad guys because he ran like the others. When he is caught, an ICE agent asked Officer Jim Street (Alex Russell) to get the man's identification. Street hands the arrestee’s wallet to the agent in front of the growing crowd. Naturally, since onlookers are filming the bust on their phones, Street becomes the face of the raid for S.W.A.T. and Commander Hicks is none too pleased that Street accommodated the ICE agent, against city policy.

Commander Hicks: Officer Street. Did you unilaterally decide to change city policy in regards to how the LAPD interacts with locals?

Hicks: Really? Because up there, it looks like you're handing over a man's id to a federal officer. Los Angeles is a sanctuary city. Don't have to agree with it, but that's the playbook the mayor drew up. Now, we all know why she did that, right?

Chris: The UDAs [Undocumented aliens] in the city will be afraid to come forward and report their crimes.

Luca: It's close to a half a million people.

Tan: And we need their trust.

Hicks: Now, I got five city council members on my phone sheet. They're pissed. Think we violated community loyalty.

Street: ICE asked me for his id. What was I supposed to do, tell him no?

Hondo: Sir, the immigration beef between the Feds and the locals is way over our heads.

Hicks: Yeah, well, this city has a delicate truce. And now because of him, they think we picked sides. Get your team in order, sergeant. And while you're at it, find Toro Ochoa so the press has something else to chew on.

The show goes on to lecture the viewer about the injustice of arresting someone for being here illegally. The claim is those who broke the law to get here belong here and are entitled to stay. Since this man didn’t have a criminal record, he will still be deported because, duh, he committed a crime illegally entering the country. His younger sister, Ariana, takes up the battle to get him released.

Ariana (Lisseth Chavez) is a, wait for it, DREAMer. And, of course, she is now a med student at UCLA because all DREAMers are supposed to be over-achieving model citizens, right? Though her brother was already 18 years old when they entered the country from El Salvador, she was only 12 years old and thus qualified.

In the meantime, a vigilante group from Medford, Oregon comes to town to mix it up with the pro-illegal alien protesters. Called the Promise Guards, they hatch a plan to capture Ariana who is speaking at a protest rally and “throw” her back over the border.

Ariana (over megaphone): My brother didn't hurt anyone. He shouldn't have been arrested. And as an upstanding member of this community, he has rights. He has a voice. Let the police and the Feds know that what they've done is wrong. Carlos doesn't deserve to be deported! This is his home!

Ariana: My home! Your home!

Ariana: Tell the Feds and police they're wrong! Look, this fight isn't just for Carlos. This fight is for all of us. We all have a voice! We all belong here!

Naturally, Hondo’s team once again saved the day at the protest rally and rescued Ariana from the Promise Guards. Street, who had been racked with guilt for simply doing his job, ended up giving Ariana the name of an immigration attorney who does pro bono work so that she could fight her brother’s deportation.

What the feel-good lecturing doesn’t mention is that the brother is employed as a house painter, taking a job from an American citizen. And Ariana is taking a spot in medical school that an American citizen has been denied. That is the hard reality of turning a blind eye to illegal aliens in our communities.