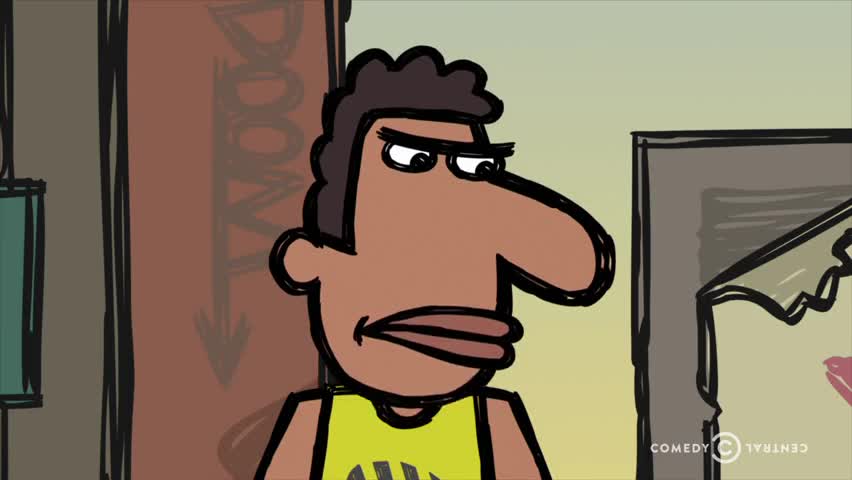 In the episode airing June 25th, Comedy Central’s Legends of Chamberlain Heights struck a blow against white appropriation with a smack at Rachel Dolezal along the way. “Chocolate Milk” deals with the white character Milk’s obsession with appropriating black culture and he looks for a way to become black – at least on the outside.

Stumbling upon an ad on his cell phone, Milk thinks the perfect answer is to visit a tanning salon and turn his white skin into a darker shade. The salon’s name is the Rachel Dolezal Tanning Salon. LOL! You may remember Ms. Dolezal from her 15 minutes of fame a couple of years ago. She resigned as the President of the Spokane, Washington Chapter of the NAACP when the fact that she’s a white person, not black as she claimed, was exposed.

Milk heads out to the tanning salon and comes out looking like a light-skinned African American teenager. He is excited to “fix God’s mistake.”

Milk: I'm not in the mood. I'm going through some "Thangs."
Video ad: Are you feeling pasty and pale? Unathletic and small meated? Would you like to be able to sing every word to your favorite rap song with your windows down? Without getting [bleep] up? Are your black friends invited to Nat Turn Ups without you? Well, then, hail a cab while you still can and come on down to the Rachel Dolezal Tanning Salon!
Shoshana: I know exactly why you're here. Hi, I'm Shoshana, your certified melanologist. How'd you find out about us? Yelp, Snapchat, or Kardashian sex tape?
Milk: Man, [bleep] all that. Just show me to the black beds.
Shoshana: Okay, super serious question. How often do you wanna be stopped and frisked?
Milk: A lot. A whole lot.
Shoshana: Slow down, Macklemore. Straight to Akon requires a manager's approval. There's paper work, it's this whole process. Let's just get you started with a nice golden Chris Brown. It's our biggest hit.
Milk: Hell "jeah," I finally get to fix God's mistake.

Milk is now accepted into the fold of black teens and their activities. He’s catnip for the ladies and allowed to play in the school basketball games instead of riding the bench. Offensively, he still refers to his black friends as “my nigs” and finally Malik calls him out. Afterwards, Malik explains to his friends that he’s tired of white appropriation.

Malik: See, that’s another thing I’ve been talking about. White appropriation. They take our fashion, our music, our culture. Why don't they take something black people don't want? Like diabetes, sickle cell, Omarosa, OJ, the Electoral College, swimming pools, police beatings, the city of Atlanta.
Friend: Talking during the movie.
Friend: Black female customers.
Malik: Hey, mother[bleep]s, I do the rants.
Both: Sorry, boss.

Deciding that going an even darker shade will serve as comeuppance, Malik follows Milk into the tanning salon for his next visit and sabotages him. Unbeknownst to Milk, Malik cranks the tanning bed setting up to the darkest level. Milk emerges very dark.

Immediately, he is treated differently. In an over-the-top portrayal of how society treats young black men, the story plays out that Milk is shunned and treated badly by those having no problem with him as a light-skinned black teen. Suddenly his hoodie and his bag of Skittles provoke aggressive treatment by police – shades of Trayvon Martin were deliberately brought in here.

In the end, Milk is sent to a camp to deal with his own aggressive and destructive behavior in coping with how society is dealing with him. After trashing the hallway in his high school, Joe Jackson (father of Michael Jackson) is brought in to “lighten” him up. Having chained Milk to a pole, Jackson is shown literally whipping Milk until he has white skin again. Yikes!

Legends of Chamberlain Heights is a crudely drawn animated series filled with over-the-top portrayals of today’s world and black youth. The vulgar language is deliberate for shock appeal. The show’s creators use their obsession with basketball for inspiration. It is hard for me to see how this show is entertaining but I don’t think I am their target audience.