TV Drama 'The Fosters:' 'People Literally Get Killed for Being Trans' 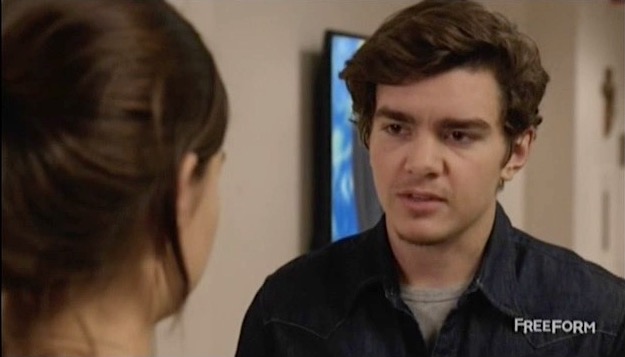 Tuesday night’s episode of Freeform’s The Fosters, titled “Insult to Injury,” was the winter premiere of season four and the network (formerly ABC Family channel) continued with its deliberate promotion of liberal Hollywood’s aggressive LGBT agenda through the use of young people.

As a newbie viewer of this series, I knew this show was chockfull of the usual assortment of social issues – a family made up of a biracial married lesbian couple and their biological and adopted kids of various ethnicities and sexualities – and all the drama written into that. Tuesday night’s episode was no different – featuring a young transgender male law student who Callie (Maia Mitchell), one of the Foster kids, may or may not want to date.

The character of Aaron is played by transgender actor Elliot Fletcher. He was introduced as season three was ending in a July 11, 2016 episode. A law student, Aaron helped Callie get her adopted brother out of jail last season. Unfortunately for Aaron, Callie outed him as transgender to her boyfriend, A.J., and tells him she would consider dating Aaron if she wasn't already taken.

Toward the end of the show, Aaron decides to speak up and tell Callie – not the sharpest tool in the shed – that she cannot just tell people that he is transgender. He tells her it is “not your story to tell” and then goes as far as to say that it puts his life in jeopardy – “People literally get killed for being trans.”

Aaron: I think I’m going to take off, unless you want me to...

Aaron: It's just not your story to tell.

Callie: Got it. Of course.

Aaron: People literally get killed for being trans, so it's a really vulnerable thing to share with someone.

Aaron: It's okay. I just had to say something.

Aaron: Let me know what happens with Jesus?

Getting killed for being trans is a horrifying thought for any transgender and their allies, however the risk is severely overblown and an already vulnerable population is being needlessly terrified with such worries. While, certainly, there have been people who were killed for being transgender, people are killed for pretty much every reason imaginable. The number of transgender murders is exceptionally low, with only 21 in all of 2015 (with various motives). A recent study claimed that there are 1.4 million transgender people in the United States, so that's a murder rate of 1 per every 66,667 trans people. Compare that to the national murder rate in 2015: 15,696 total murders in a country of 320 million people equates to 1 per every 20,387 Americans.

So, that’s that. Callie puts A.J. and Aaron in a strange sort of competition for her attention. Aaron is clearly a friend but she introduces the idea that she’s attracted to "him." It’s an odd twist, even for this mixed bag of social agendas.