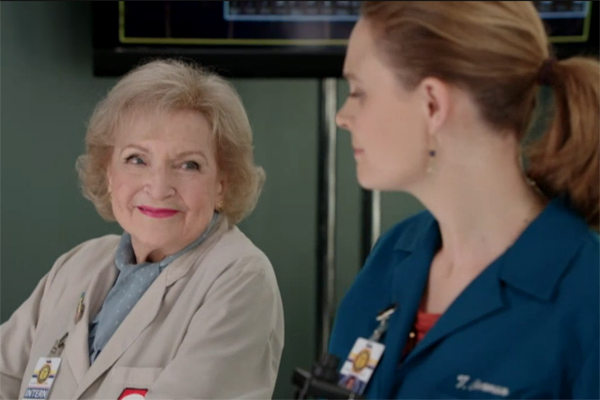 No bones about it, this Fox crime show is racking up the cameos, with two big guest stars in the lastest episode, “The Carpals in the Coy-Wolves.”

The first guest appearance on Bones was actress Betty White, ninety-three years young and still a popular television favorite, who played a forensic anthropologist named Betty Meyer. Meyer has fifty years of experience in the field and was called in by the Jeffersonian team to help solve a murder, giving Temperance "Bones" Brennan (Emily Deschanel) unexpected competition.

As the skeletal remains of a murder victim are examined, the astute Dr. Meyer even makes an accurate observation that one of the male members of the team is experiencing performance problems in the bedroom, as Bones reacts with understandable curiosity. Awkward!

Bones: There appears to be a small nick to the triquetral. Tangential trajectory indicates it is a fracture, however, we won't be certain what caused it unless we have the missing bones.

Hodgins: You know, the only way to get them would be to go into the woods and track down the coywolves.

Bones: Well, normally I'm not one to endorse one of your ill-conceived expeditions. However, I need those bones. You should take Dr. Wells with you.

Meyer: Oh, nonsense. I can cover for both of you. Besides, being in nature will be good for Mr. Happy.

Hodgins: Wow. Do you miss anything? Not that I'm confirming anything.

Meyer: It's okay. I'm around a lot of older men with the same issue. After a while, you can practically smell it on a man.

Wells: Uh, I suppose a little exercise could prove therapeutic.

Mayer: Forget exercise! What you need is to get out of your head and go wild. With your permission, Dr. B?

Brennan: Go. And if it's any consolation, Dr. Wells, I don't smell anything different about you.

Wells: Well, that's because Dr. Mayer's a lot more perceptive than you are. Okay, let's go.

A second notable guest star is retired NFL cornerback Ronde Barber, whose career spanned sixteen years with the Tampa Bay Buccaneers. In this episode, the murder victim, a real estate broker, was in a dispute with Barber’s character, Lou Divers, a starting NFL running back. The dispute involved fantasy football and it played out on social media – a Twitter war between the two.

Booth: One minture you're being praised by millions of fans, and the next you're in a Twitter war with a fantasy football player.

Divers:  I-I don't know what you're talking about.

Booth: No, but murder is.

Divers: You mean this guy's dead?

Booth: Yeah, he was killed the day that you showed up to pay him a visit. You want to tell us why some no-name fantasy fan's worth tracking down?

Divers:  This guy took it too far. You know, I can handle the trash talk, but when you threaten my wife and kids, it's taking it to a whole other level.

Booth: So, you killed him and then you covered your tracks by deleting the tweets.

Divers: No. I deleted those tweets because we figured this out in person.

Agent James:  You made up?

Divers: Yeah. I mean, football's a brutal sport, man, but I'm not a violent dude. I just needed to let him know that those threats don't play well with me.

Booth:  And he took that well?

Divers:  Yeah, he was remorseful actually. To be honest with you, he was in a great mood.

Agent James: Hmm. Any idea why?

Divers: He was bragging about some jackpot that he'd just won. Something about having the highest scoring fantasy player at every position.

Divers: Yeah, it's, uh, nearly impossible, so I imagine that payout was pretty big.

Agent James: So, somebody owes our victim a lot of money.

A fun side note:  Betty White may be a seasoned citizen but she has a presence in social media.  She used Twitter to publicize her guest appearance in this episode. On August 27, 2015, White tweeted to her 1.25 million followers:

“Wanted to let you know first that I will be joining the @BONESonFOX family for an upcoming episode this fall! #Bones"