It’s well known that our new president, Donald J. Trump, has been the center of the media’s negative attention. The producers at ABC’s Match Game made sure his image remains tarnished by, for the second time this season, painting him in a negative light.

On Wednesday’s season finale, lefty host Alec Baldwin pitched the question: "I think my new pet parrot used to belong to Donald Trump. It's got an orange comb-over, small wings, and it keeps saying BLANK." The answers were predictable.

Lamorne Morris was the first of many celebrities to say a variation of “grab her by the p***y,” leading to a groan from the audience. Casey Wilson said the same, and added that she’s a “Nasty Woman,” picking up a few laughs. Leah Remini followed the general answer.

Neicy Nash said, “Grab them by the beak,” which is clean, but still draws attention to the matter. The only celebs to come out with clean responses were Mario Cantone with “HUGE” and Scott Wolf with “WRONG.” The contestant said, “Lies,” and Baldwin mocked the horrible answer. 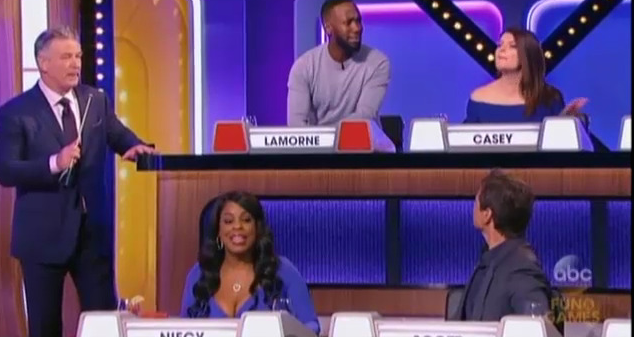 Going to the commercial break, Baldwin added his two cents with the question by stating the contestant would “play Super Match and try to grab our sponsor by the BLANK.” The Super Match round immediately following was a giant love fest between the contestant and celebrity Mario Cantone as they bonded over being “gay brothers” and playing for the same team.

What a night, folks. Maybe when the show comes back for it’s next season, they’ll tone it down off President Trump and maybe lose the perverse leading questions. WRONG!