Brooklyn Nets forward Kevin Durant requested to be traded from his team earlier this summer, which makes sense because he’s an entitled narcissist that leaves teams whenever things don’t go as he would want. 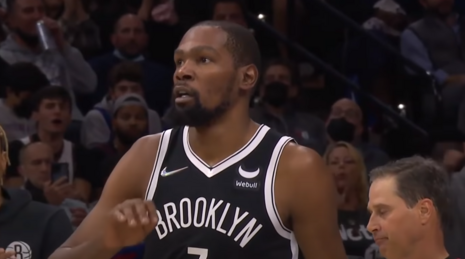 The Nets, however, are rightfully hesitant to let go of one of the best talents the league has to offer. However, a former teammate of Durant’s suggested a foolproof way for him to get what he wants.

Retired NBA Champion and No. 1 overall draft pick in 2005 Andrew Bogut took to Twitter to offer his sage wisdom to Durant, which actually would have a high chance of working should Durant follow through with it.

An easy way for KD to get out of @joetsai1999 's @BrooklynNets that no NBA analyst is discussing.

As you may know, Nets owner Joe Tsai is deeply connected with the Chinese Communist Party and has a history of trying to shut down any anti-China activism. When then-Houston Rockets general manager Daryl Morey tweeted that same slogan Bogut suggested back in 2019, Tsai lobbied for Morey to make a full-on apology in what has become one of the many black stains in the shady relationship between China and the NBA.

With Tsai’s previous history regarding how he handles the ever-tense NBA-China relationship, it's easy to see why Bogut’s sarcastic suggestion might actually work should Durant take that course of action. But Durant better be careful, since there is a possibility that the league could ostracize him like they have Enes Kanter Freedom and other non-woke players and coaches in the league.