A Saturday UFC 274 fight in the lightweight division had one of the most dramatic endings in the sport’s history. 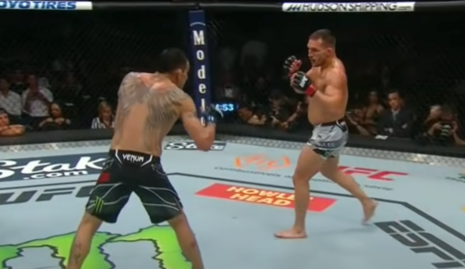 Shortly after an intense first round, fifth-ranked Michael Chandler landed a thunderous kick to the jaw of seventh-ranked Tony Ferguson, sending Ferguson to the ground immediately where he remained unconscious for several minutes. The win helped Chandler avoid losing a third consecutive fight, while it extended Ferguson’s losing streak to four fights.

Here’s the kick that many pundits are rightfully calling the most devastating knockout kick in UFC history:

This angle of Michael Chandler's KO is insane 😳#UFC274

My jaw hurts just watching that.

Instead of hogging all the attention after the fight, Chandler used the moment to give glory to God for winning a fight that could have easily seen him falling on the mat unconscious.

“What the fans at home will never, ever feel is when you’re down and you have a round like I just did – it wasn’t that decisive and Tony Ferguson showed up – you’ve got to pull something from inside of you,” Chandler said. God came through and here we are.”

Chandler now wants a shot at fighting Conor McGregor in the 170-pound weight class, to which “The Notorious” seemed more than willing to oblige. Should it take place, that would be top-caliber entertainment.