On Thursday, the 2022 NFL Draft began and on what was supposed to be a night where the hard work of hundreds of young men comes to fruition and when dreams are realized, 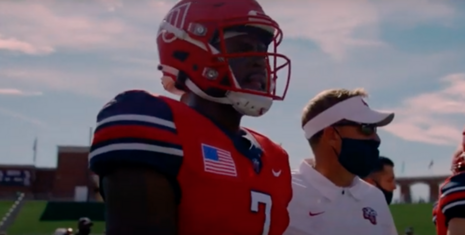 all Andscape could focus on was the hopes that one specific quarterback would be drafted to keep a race quota going.

Liberty University quarterback prospect Malik Willis was projected to be drafted in the first round last night, but surprisingly did not hear his name called.

However, in anticipation for the draft, Andscape reporter Jason Reid was more focused on Willis’ skin color than anything else. This isn’t surprising coming from a guy who will have a book coming out in August titled, “Rise of the Black Quarterback: What it Means for America.”

“[I]f Willis, who rose to prominence as a top draft prospect while staring at Liberty University, is selected among the first 32 picks in the 87th NFL draft, it would mark the first time in league history that at least one Black signal-caller was chosen in the opening round in six consecutive years,” Reid wrote. “The improved standing of top Black quarterbacks who enter the draft after completing decorated careers in college is yet another example of the rise of Black passers in the sport overall.”

That streak ended Thursday, but it's an inconsequential and irrelevant streak anyway -- the kind of stat only the race-obsessed would even notice, let alone waste words on.

That the NFL objectively had a history of thinking that black men are incapable of playing quarterback, but that idiocy was long ago kicked to the curb.

For those that care, black quarterbacks are some of the most prominent stars of the league right now. Patrick Mahomes, Lamar Jackson, Russell Wilson, Kyler Murray, and several others have taken the league by storm, and no one doubts their value or their ability to play the position. And there have been dozens of others. Yet somehow, we still see articles like this pop up claiming that it’s not enough to go correct an old narrative.