In case you need to be reminded, the mask mandates are a charade. 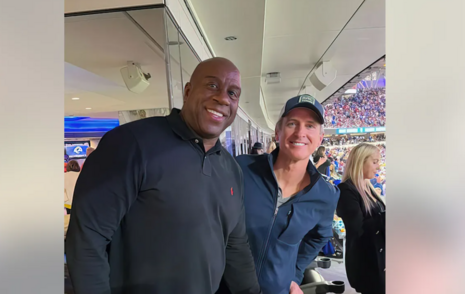 Even though most of the sane individuals on the planet realizes that masks do nothing to prevent the spread of COVID (and that number seems to be quite small sometimes), SoFi stadium (home of the Los Angeles Rams) has a strict mask policy for all who attended, requiring fans to cover their faces unless eating or drinking.

Thousands of fans crowded into the arena on Sunday to watch the NFC Championship game between the San Francisco 49ers and the Los Angeles Rams prepared to obey the rule, despite its complete and utter stupidity.

But high above the masses of those who could not afford higher-quality seats sat a contingent of rich, upper-class social elites and politicians – who conveniently were not following the stadium’s mask rules.

NBA Hall-of-Famer Magic Johnson took several pictures with figures such as California’s tyrant-in-chief Gavin Newsome, Los Angeles Mayor Eric Garcetti, and San Francisco Mayor London Breed – all of whom have made living in California a real-life nightmare. None of them made even a slight effort to hide the fact that they could care less about the mask mandates.

This was not Breed’s first time receiving criticism for disobeying mask laws. In September, she was seen in a San Francisco jazz club without a mask but brushed aside any backlash for her actions:

"The fact that this is even a story is sad," Breed said. "(We) don’t need the fun police to come in and micromanage and tell us what we should or shouldn’t be doing."

The ironic thing is, Breed and her power-obsessed contemporaries are the “fun police” she’s worried about. They just don’t like having to play by the rules they set.

Through their actions, these upper-class tyrants consistently show that they believe there is a vast chasm between themselves and the majority of people in our country, and that thing that separates them from us is how the law is applied. They believe that they can traipse around freely as if it’s 2019, but that everyone else has to abide by their list of ever-changing, confusing, and pointless rules so they can exercise as much power over others as possible.