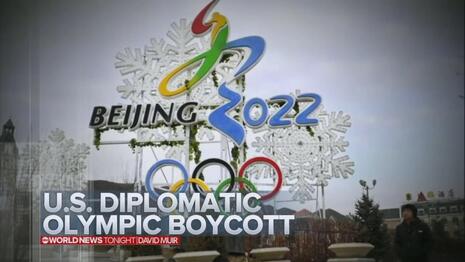 Earlier this month, President Biden said the would not be sending any diplomats to the Winter Olympics in Beijing due to the numerous and well-documented human rights violations the Chinese regime has committed. However, Biden once again showed he has no spine and has walked back his original stance on sending his diplomats to the Games.

In an article in Breitbart News, Frances Martel said it was discovered that “several American officials have applied for Chinese visas specifically to attend the Beijing Olympics.”

“We intend to provide consular and diplomatic security services to ensure our athletes, coaches, trainers, and staff are secure and have access to the American citizen services that we provide to all US citizens overseas,” an unnamed spokesperson said.

So there will be a U.S. diplomatic presence after all.

To make matters worse, the communist Chinese are happy to call attention to this capitulation, so the South China Morning Post quickly saw and reported it:

“The U.S. side, on one hand, claims it will not send any diplomatic or official representation, but on the other hand it is applying for visas for its officials across several departments,” Foreign Ministry spokesman Zhao Lijian said according to the Morning Post, “including the State and Defense departments. This sort of rhetoric is puzzling.”

So it looks like Biden will be diplomatically supporting the Games after all. And while it is kind of what we expect from this administration, it still leaves a bitter taste in the mouths of many Americans.