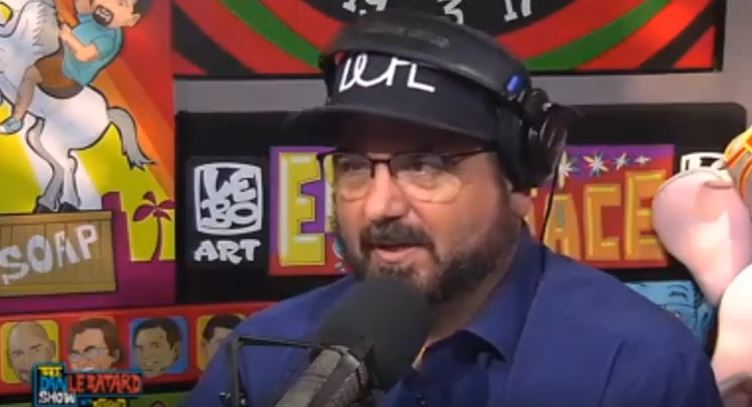 Traina said parts of Le Batard's inflammatory remarks were "black and white," but others were "nuanced." "If you have a radio show and you're covering three or four hours and your job is to be an entertainer, you talk about the things that you wanna talk about."

"If anybody listens to Dan Le Batard (see above photograph), you know it's not a straight sports show, and I think the context of that is important here," Traina continued in excusing away the ESPN host's inappropriate remarks.

Traina additionally excused Le Batard's behavior as consuming only three minutes of his radio program. He also said that if Le Batard "had just focused on the rally and the chants and the racism, it can be spun as Dan Le Batard ignores ESPN policy and talks about politics. But the headlines were Dan Le Batard calls ESPN 'cowardly' and doesn't have the stomach for the fight. ... Now look, the MAGA people would still go after ESPN just because of what he said, but when you attack your own company you're going in a place that's going to get a lot more attention than just, you know, the Breitbarts of the world."

Marchand, who on Monday wrote the column "The huge decision ESPN’s Dan Le Batard faces after talking politics", disagreed with much of what Traina said. In fact, Marchand said ESPN President Jimmy Pitaro is right for demanding his Disney/ESPN "cast members" stick to sports:

"If it's not sports related that's not what they want to do. ... I enjoy the show, it's very good ... but the bottom line is, that said, there are rules that you're agreeing to, the people at Disney or ESPN are complicit because they're not spending their time on the air talking about what Donald Trump said or what the crowd chanted.

"I don't know of anybody that would argue that the idea of discussing race in America is more important than sports ... but if you tune into ESPN and your company has decided from the top that we want to be a sports network and someone wants to hear about the news of the day, there are many channels, websites and people on social media that people can turn to. We don't want our people to be part of that, because we think people come to our network for sports, and I would argue they're right."

Marchand said that when an employee takes the money and decides to be a cast member, "you decide to play by their rules. You represent the company, and if you don't like it you can leave."

The two debaters did come to agreement on one aspect of the controversy at ESPN. It concerned ESPN policy that allows its personalities to broach the subject of politics if a sports figure engages in political speech.

"There is a little bit of a weak aspect about it," Traina said. Marchand said if ESPN will go political if a sports figure does it first, "It's implying you're waiting to say something."