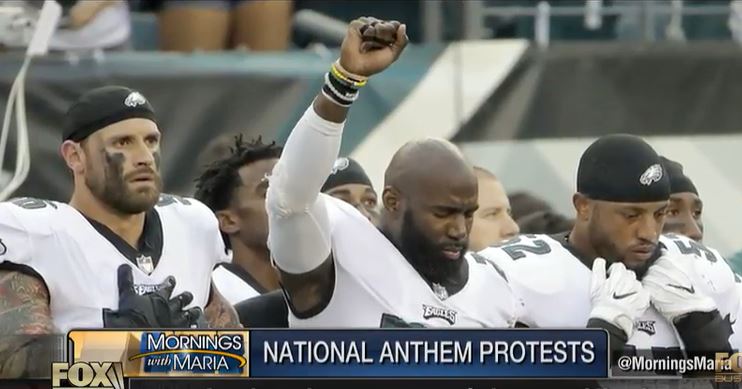 Sunday's Super Bowl is far more than a battle of AFC and NFC champs. Evan Grossman, of The New York Daily News, calls it a matchup between two franchises from polar opposite ends of the political spectrum, a clash between one of the most socially conscious teams in the NFL — and President Trump’s favorite football franchise. Grossman's characterization of Team Woke and Team Trump is based on flimsy "evidence."

The differences between the two teams is "striking," Grossman writes. The Patriots are essentially "Team Trump" because quarterback Tom Brady was seen wearing a Make America Great Again hat and Coach Bill Belichick once wrote a letter to the president. The team owner, Bob Kraft, donated to President Trump's inauguration. Nevertheless, Grossman says the Patriots' ties to Trump run deep.

Grossman's argument is weakened by several key facts, some of which he admits. Former U.S. Senator and Secretary of State John Kerry -- a Democrat -- is also a friend of Belichick's and recently visited him. Several Patriots' players boycotted the White House visit last year. New England safety Devin McCourty is active in the Players Coalition, read "NFL protesters." McCourty and team president Jonathan Kraft are involved in "important social issues." We aren't told anything about the political affiliations of the other 51 players on the team.

So much for the "Team Trump" moniker.

Philadelphia is definitely Grossman's "woke" team of the year. Safety Harold Jenkins is the leader of the Players' Coalition that relieved the NFL of $89 million, money to be used for the protesters' social justice causes.

The Eagles' Chris Long donated his salary to schools in Charlottesville and actually places his hand on Jenkins' shoulder when the latter raises his first during the national anthem. That's really woke! Conveniently not mentioned? President Trump is donating his presidential salary as well! Does that make the prez woke, too?

Several Eagles attended a protest for Meek Mill, a rapper with a record of drug dealing, assaulting police, gun crimes and violating his probation. They were showing America that his jailing was "an example of what’s wrong with the system." Score it a 100 on the woke meter!

This next point is really laughable. Grossman writes, "While Kraft is a close Trump friend and supporter, Eagles owner Jeff Lurie earned a doctorate in social policy from Brandeis University." Wow! And duh! Lurie is currently running a football team, and Trump is directing social policy at the nation's highest level!

Philly is the "Super Bowl champion" of woke teams, Grossman raves: "But for all the work the Patriots and the rest of the NFL are doing, the Eagles and Jenkins, especially, stand out from the crowd."

Super Bowl 52 may be the biggest sporting event of the year, but, to Grossman, Team Woke's heroic sacrifices for social justice clearly stand taller.