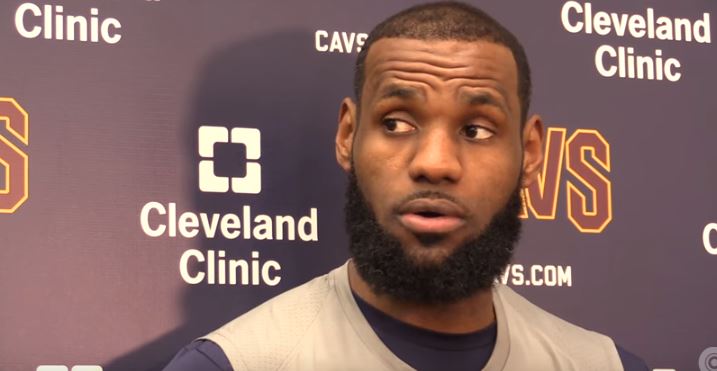 Defending NBA champion Golden State whipped LeBron James' Cleveland Cavaliers yet again on Monday, leading to reports that the losing team's clubhouse is in disarray. The day was far from a total loss though because, prior to the game, James returned to his political forum to slam dunk President Trump, much to the joy of his adoring media.

Last fall, James tweeted a shot at Trump calling him "u bum." On Monday's Martin Luther King, Jr. Day James gave his own "state of the racist nation" address and threw a sharp verbal elbow at the nation's chief executive, describing him as a stupid racist:

"The state of racism will never die, but what we cannot do is allow it to conquer us as people. We can't allow it to divide us ... The guy in control has given people and racism, and negative racism, an opportunity to be out and outspoken without fear. And that's the fearful thing for us because it's with you, and it's around every day, but he's allowed people to come out and just feel confident about doing negative things."

ESPNW's Dave McMenamin lapped it up, writing, "James was referring to President Donald Trump, whose policies and rhetoric since he came into office have been repeatedly challenged by James, and other leaders in the African-American community, as divisive and harmful." James, a mega-privileged millionaire, polished off his insult with the accusation of presidential stupidity:

"We are in a difficult state right now as Americans as well with the leader of our country. But us, like I said, no matter the religion, no matter the shapes and sizes, we all have to continue to come together and shine a brighter light on, you know, I mean, [I don't want to] use the word stupidity, but that's basically what it comes down to."

McMenamin also wanted us to know that James is wearing a Black History Month pair of basketball shoes inscribed with the date "07/13/2016." That was the day when James and NBA stars Chris Paul, Carmelo Anthony and Dwyane Wade opened The ESPYS awards program by promoting athlete activism. That athlete activism gives the media an open door for not sticking to sports.

James said he hopes he makes the late Dr. King proud as he's "looking down on us."

That we can't know. But we do know that any athlete who criticizes Trump or any other Republican is guaranteed to find much favor with the left-stream media. And when that person has the stature of "King James," his trashing of the president is taken as gospel and usually goes unquestioned.