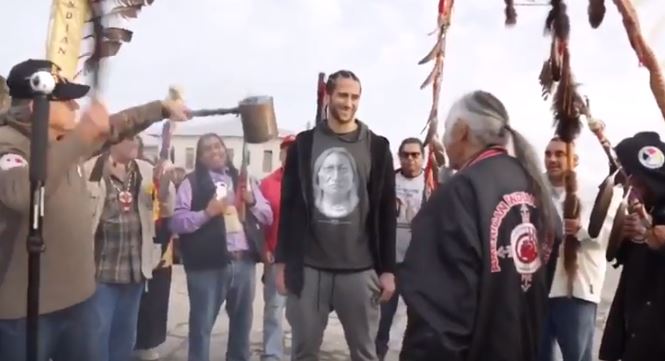 If he's smart with his time and his millions, ingrate Colin Kaepernick will never have to work or worry about money again. Rather than express gratitude yesterday for all he's been given, Kaepernick chose to attend the UnThanksgiving Day protest on Alcatraz Island to do what he does best: insult America.

Kaepernick, the wealthy activist and baggage-laden former quarterback that no team in the NFL is desperate enough to sign, joined with 90 Native Americans to commemorate an occupation of Alcatraz that began in 1975.

“Today, I was on Alcatraz Island at the Indigenous People’s Sunrise Gathering, in solidarity with those celebrating their culture and paying respects to those that participated in the 19-month occupation of Alcatraz in an effort to force [the U.S.] to honor the Treaty of Fort Laramie,” Kaepernick tweeted.

Amid traditional dancing and speeches by Native Americans, "Kaepernick delivered a message of resistance and hope to the thousands gathered on the island," gushed the San Francisco Chronicle's Michelle Robertson:

I realize that our fight is the same fight. We're all fighting for our justice, for our freedom, and realizing that we're in this fight together makes it all the more powerful.

Kaepernick has never lacked for freedom or privilege. A football scholarship paid for his college education. A brief NFL career made him a 1-percenter. His biggest need is a spotlight for grievances, and the Native Americans gave him one yesterday. Newsweek's Beatrice Dupuy wrote of what a rotten day Thanksgiving is for some:

While for most Americans, Thanksgiving Day is for feasting, football and giving thanks, for Native Americans, it is a reminder of dead ancestors, racial slurs still being worn on football jerseys and families around the nation feasting on food from colonized agricultural land.

Native Americans say the day is not a holiday but rather a celebration built on a lie, one they would rather spend indulging in some self-care instead of turkey and yams. Some even refer to the day as Day of Mourning or Unthanksgiving Day.

Unthanksgiving Day is “about reflecting, remembering and celebrating that we are still here and our culture still survives,” Michael Horse, an American Indian actor who took part in the ceremony on Alcatraz, told Newsweek. “It’s a wonderful way for native people to anti-celebrate the day."

The word "anti-celebration" is just the right explanation of what the holiday spoiler Kaepernick does best. From the nation of Ghana on the Fourth of July, he criticized his homeland as a place lacking in freedom. Now he's joined with those in anti-celebration of the national day of Thanksgiving.