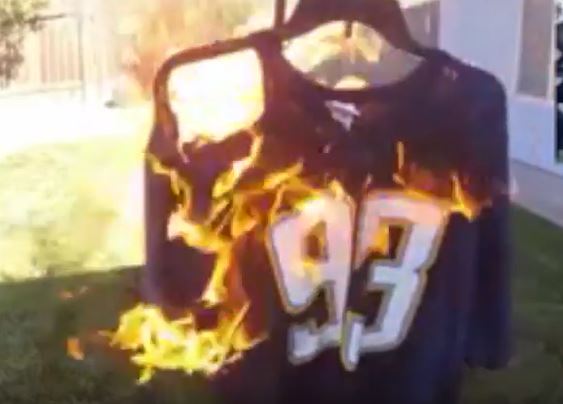 Amid news and YouTube videos of pro football fans burning the jerseys of protesting NFL players, an African-American writer from Brooklyn alleges these actions are the modern manifestations of lynching, hanging and burning of blacks. Matthew Allen, a music journalist and television producer, made his inflammatory claims today in a blog on The Root.

Incredibly, Allen claims, "The core of the rationale of jersey burning stems back to lynching" and adds:

It is an alarming tradition of overt dedication to sports team(s) that is dangerous and unhealthy. It is in fact the remnants of a more time honored ideal of carnivorous systemic erasure of black progress, whether to prevent the fiscal independence of other black athletes or to discourage the making of political statements on a globally observed platform. With the recent events involving Kaepernick, the U.S. President, the NFL at large and its fans, it’s time to have a real examination of how jersey burning is drawn from the same spirit that led whites to hunt, hang, burn and murder black people for centuries.

The prejudiced entitlement practiced by the burning party is because the black player challenged their beliefs, be they political or simply in the context of diminishing the power of their former team. To be fair, white athletes are not immune from having their jerseys burned too, but the ratio of black players to white team owners and fans calls to mind a similar ratio of black workers to white owners in the 18th and 19th centuries, don’t you think?

Allen writes that fire was used by racists of the past to "make the black man stay in his place." Fast-forwarding to the 21st century, he complains that the wealthy white owners of professional sports teams are accumulating massive wealth and power off the backs of their athletes' labor, "a majority of them black. Sound familiar?"

Colin Kaepernick is vilified by millions who believe he disrespected the country, Allen writes. Kevin Durant and LeBron James were vilified for the same reason: they refused to "stay in their place."

America did not invent the act of burning people, Allen admits, but then says, "Americans were simply the latest to incorporate the act of combustible retribution." He blames these hideous crimes of the past on the religious and the more recent on modern-day selective breeders and "sharecroppers":

From slavery to reconstruction to Jim Crow, setting black men and women on fire was justified by seemingly virtuous ideals of spiritual and religious loyalty, preached through law and regulation. As the country grew more civilized through the Civil Rights movement of the 1960s, lynchings decreased. However, the mindset that legitimized burning men was only dormant, and manifested itself in other ways: the systemic disenfranchisement of black people in housing, education, employment and substance abuse.

As professional sports integrated African Americans, an opportunity to reintroduce tactics of slave breeding and labor by white owners was carried out via sports drafts, combines and deceptively disproportionate salaries; yes, these athletes make millions, but it’s peanuts compared to the hundreds of billions the owners get. Think of it as modern day sharecropping.

Recently, the President of the United States ignited a firestorm regarding black athletes that only served as proof that the volatile mindset of black burning is, unfortunately, still quite valid.

Allen accused former congressman Joe Walsh who, through a tweet, of expressing the view that black athletes and celebrity protesters are "nothing more than ungrateful black multi-millionaires. This belief that these men are privileged to make lots of money and need not criticize the country is a carry-over from slave masters and overseers who believed that they allowed whatever provisions their slaves enjoyed and should consider themselves lucky."

The Missouri bar owner who taped the jerseys of Kaepernick and Oakland Raider Marshawn Lynch near his front door "provides scary confirmation that the disdain of Kap’s protest is so profound, it has conjured up a white citizen who affirms violence—whether fantastical hyperbole or inappropriate tongue-in-cheek—against a black citizen."

Allen, the senationalist, unloaded the rest of his venom by claiming white behavior "speaks volumes about how the wishes and plight of the black American has been ignored by white America in lieu of maintaining a misplaced sense of patriotism through a red, white and blue piece of cloth and a 203-year-old song. It does not matter if fans are only burning jerseys genuinely due to their love of sports and their team and not because they harbor bigoted views towards black people. The very ideal of violent prejudice exists subliminally within the act, like an airborne virus. To acknowledge the parallels will be the only way to begin to douse the flame. And we cannot be satisfied, otherwise the embers will ignite again slowly."