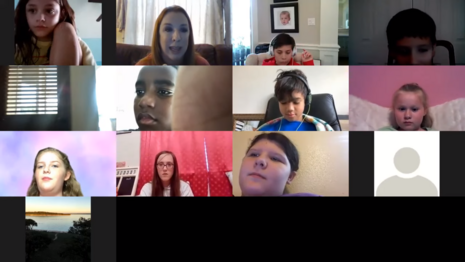 Naturally, Rozsa made it racial even though all ethnicities struggled: “Children of color in the United States were already at a disadvantage in America's education system, and these inequities broadened during the pandemic.”

After attempting to racialize, he wrote, “American children more broadly have also seen a drop in test scores and other educational benchmarks as a result of the pandemic.”

Why? Not for the common sense reason conservatives claimed, of course: “Although conservatives have blamed this on school closings, other experts say it is because of the more widespread disruption caused by the pandemic to every sector of life.”

The left can not bring itself to give conservatives any credit. Trust the “experts.”

As if this were not enough, “Amidst the chaos and anxiety of the lockdown, there was a spike in reports of mental health-related emergency room visits among American young people.”

In part, it stated that: "This worsening crisis in child and adolescent mental health is inextricably tied to the stress brought on by COVID-19 and the ongoing struggle for racial justice and represents an acceleration of trends observed prior to 2020.”

So they knew mental health was already a crisis for the youth before COVID-19. It should have been obvious that lockdowns and shutdowns would accelerate it.

It was such a blessing that young people generally had effective immunity against COVID-19. Instead of taking advantage of this and letting them live as normally as possible, many places in the US did not. Instead, society obliged children to protect the adults.

In terms of the racial element of the emergency declaration, it is probably accurate. If children watched the horrifying video of George Floyd’s death at the hands of the police and were told that it was commonplace and witnessed the aftermath, such as protests and riots, that would have a detrimental effect.

Parents and society are not raising children right nor protecting them appropriately anymore. That needs to change for America to have a bright future.