On Nov. 7 Jon Levine, Media Editor at entertainment and media news website The Wrap, posted two tweets which had some initially puzzling thumbnails of other tweets embedded in them:

The pictures, once expanded, reveal several tweets made from 2010 to 2011 which contain detestable jokes at the expense of Jewish people. The account associated with these posts is @Travon, which belongs to Full Frontal with Samantha Bee writer Travon Free. Free has also written for talk show ‘Any Given Wednesday with Bill Simmons’ on HBO and won a Primetime Emmy for his work on The Daily Show in 2015.

The “jokes” need no explanation. Their subjects range from finance (“All it takes is 3 Jewish guys to end the NFL lock out. Who would be better at collective bargaining that a group of jews?”) to full-stop hate spewing (“Damn, Jew B****rd N****r Lover tho??”).

Unfortunately, a search of Free’s name on Google renders no news articles covering the tweets, no apologies or condemnations from TBS, and not even a mention of the behavior from Samantha Bee. On the week of the horrible attack on the Pittsburgh Tree of Life synagogue, however, Bee was quick to lump Republicans in with anti-Semites: 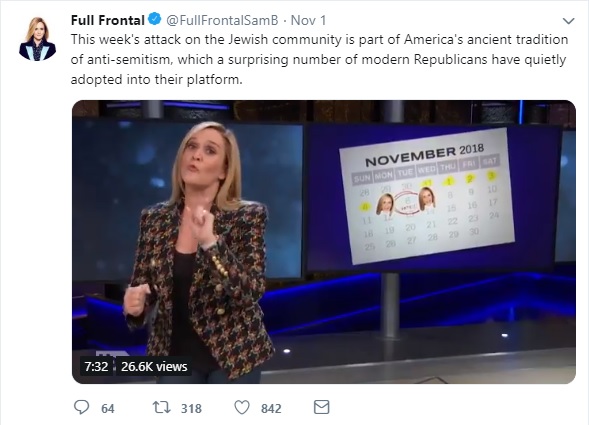 On Nov. 8, Free issued an apology on his Twitter page: 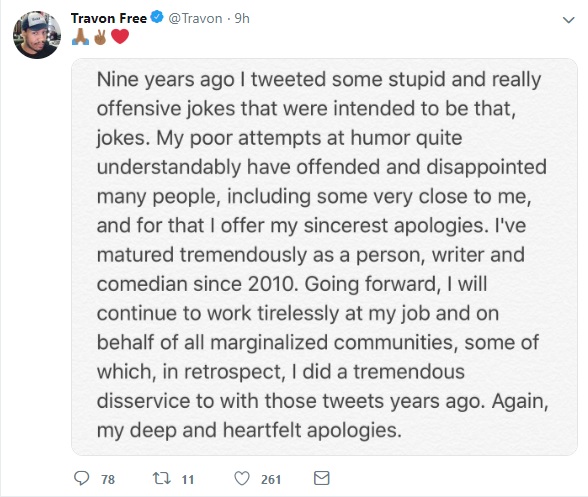 Nowhere in this tweet are Jewish people or Judaism mentioned specifically; Free simply resolves that he will “continue to work tirelessly at [his] job and on behalf of all marginalized communities, some of which, in retrospect, I did a tremendous disservice to with those tweets years ago.”

Note also that the apology is housed in a picture, and the actual text of the tweet consists of only three emoticons. This prevents the apology from being searched using words on Google or any other search engine.

The media must show a shred of accountability.