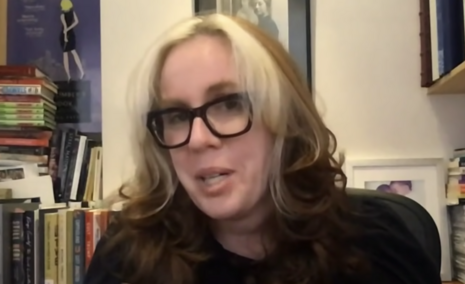 For her, it’s not about being diplomatic or even ignoring your “creepy uncle” and his Trumpy opinions, you need to actively “deprogram” them.

In her latest submission to the magazine's newsletter, Jong-Fast wrote, “Some people (like my friend Tom Nichols) think that you should spend your Thanksgiving playing nice, pretending that your cousin doesn’t follow QAnon and that your uncle doesn’t believe the election was stolen,” she wrote.

“I love Tom, but he’s completely wrong,” she stated, adding, “This is your chance to deprogram them.” Oh so now the lefties are playing offense this holiday. Now that Trump isn’t making the pussyhat-wearing, single aunts of the world crazy with his orange-hued existence, it’s their chance to convert the unwashed middle American relatives with progressive talking points.

Kind of ironic to demand that on a holiday the left decries as a remembrance of wicked colonialism, don’t you think?

But anyways, Jong-Fast explained that this being the first Thanksgiving during which people are not hiding from the Chinese virus, more enlightened relatives should take their opportunity to remind “your aunt that maybe the news she gets from [Facebook] isn’t all that reliable. And that maybe the MAGA news network is not giving her unbiased news, either.”

Though are we the only ones that find it hilarious that Jong-Fast is probably so starved for familial interaction after two years of COVID paranoia that she’s actually willing to have a discussion with her crazy Qanon-believing cousin from Milwaukee?

Yeah, Jong-Fast is so eager for political warfare over the dinner table that she practically made an itinerary of political topics to discuss, the first one being vaccines. “Especially when it comes to vaccines, family members can actually win each other’s hearts and minds,” she wrote, saying that that might be smart because “according to a Time/Harris poll, 59 percent of people got vaccinated after a friend or family member did. You could literally save your creepy uncle’s life.”

The second topic to convert your “creepy uncle” on is that of the stolen election, or as our charming bitter feminist referred to it, “The Big Lie.” “There’s a decent chance someone at your Thanksgiving table will be Qanon-curious or believe the Big Lie. Should you let this person rant and rave about how there were voting ‘irregularities’ even though there weren’t irregularities?" she asked.

Of course not. Tell them “nothing happened; it was a completely normal election where Joe Biden won by almost the same margin that Donald Trump won in 2016.” Oh yes, that sophisticated argument should really end the discussion.

The author ended her piece on a humorous note, saying, “maybe you’ll plant the seed, sow just a little doubt about whatever Tucker Carlson is saying now. Maybe you’ll even change a heart or a mind. Maybe you’ll bring the temperature down just a tiny bit. Or maybe you’ll need to report a relative to the FBI!” Ha Ha! Though really, perhaps that last one should be seen as a moderate threat considering how the FBI seems to work these days.

But all things considered, maybe we should be happy that a lefty is actually excited about having a political discussion instead of trying to force everyone to shut up.