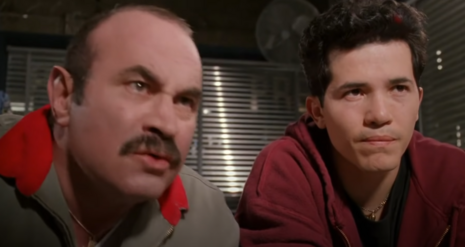 Well you know what, John, Mario and Luigi are Italian, for heaven’s sake. They are white. Sure they exist alongside turtles and walking mushrooms in a Japanese fever-dream fantasy, but they’re clearly white.

After the cast list was announced earlier in the week, Leguizamo, the part Puerto-Rican actor who starred in the universally hated early nineties film Super Mario Bros., voiced his displeasure with the fact that people of color were not filling in any of the main roles, though that’s not entirely accurate.

Actors Chris Pratt, Charlie Day, Sebastian Maniscalco and others were announced as playing the famous denizens of the Mushroom Kingdom in the upcoming animated film, and even though trying to imagine Pratt playing an Italian plumber is nigh impossible, it didn’t deserve the racial consternation Leguizamo expressed via Twitter.

Leguizamo began his tweet with, “So glad superMariobros is getting a reboot!” And honestly we’re going to flag him out of the gate. No way are we considering that nineties schlock the original Mario movie. This upcoming movie may suck but it sure ain’t a reboot of whatever that was.

Still, his tweet had more imbecilic content. “Groundbreaking color-blind casting in original! Plus I’m the only one who knows how to make this movie work script wise!” he added. So we’re championing color blind casting, but at the same can’t be satisfied without specifically Hispanic representation? Whatever.

So glad #superMariobros is getting a reboot! Obviously it’s iconic enuff. But too bad they went all white! No Latinx in the leads! Groundbreaking color-blind casting in original! Plus I’m the only one who knows how to make this movie work script wise! pic.twitter.com/lNokmdpwMq

We’ll just point out that the last time Super Mario Bros. had “LatinX” representation, the movie bombed historically. It has an abysmal 28% on RottenTomatoes.com and was described by actor Bob Hoskins as the “worst thing I ever did.” He also trashed it as “ a f---ing nightmare. The whole experience was a nightmare.”

Though we know Leguizamo’s Latin heritage had nothing to do with influencing that failure, just him as a person and actor. Still with the 1993 movie being so bad, we’re willing to bet that this “all-white” movie about Italian plumbers jumping on mushrooms and sliding through pipes will be much better.

So Mr. Leguizamo -- and this is very much pun intended -- pipe down, please.