The lead singer and guitarist from Megadeth, and one of the founding members of Metallica, Dave Mustaine is actually embracing the spirit of metal and sticking it straight to the freaking man. During a recent concert in New Jersey, Mustaine gave a speech about how Americans are living in “tyranny” right now. 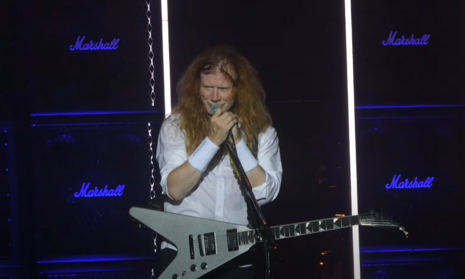 Mustaine has been writing songs about government tyranny, the military industrial complex, and the new world order for more than thirty years, so this not a big stretch.

In a set on September 15, a show featuring blistering metal classics and some new tracks, Mustaine made a point to share a moment with the crowd and bask in the unity that we’ve all been missing since the outbreak of the Wuhan virus.

He remarked about the power of being in a raucous crowd of like-minded people away from the bureaucratic nags who demand that we stop the fun because it risks spreading Coronavirus.

Mustaine began by asking, “is there anybody here besides me who’s having a great fucking time?!” The crowd roared back affirmatively, flashing devil horns signs and cheering him on. For both the metalhead and crowd, it’s clear it had been too long without a show.

“But I just wanna tell you how great it is. Look around you guys. Look to your right, look to your left and look how wonderful it is,” he said. “We’re all here together, we’re not in fucking bags, you know? We’re not freaking out and we’re not yelling at people, ‘Where’s your fucking mask?’” he added.

How right he is.

“Where’s your mask, you loud cow?” the singer asked the hypothetical mask Nazi, as scores of people in the audience egged him on. Chants of “USA! USA!” and few intermittent “FUCK JOE BIDEN's” could be heard from the crowd as well.

Mustaine acknowledged the spirit of the crowd, saying, “It starts with this kind of sensation that we feel right now, where we feel together, we feel like there’s strength in numbers. We are invincible. People will not be able to stop us.”

It became more clear that the Megadeth frontman was speaking to the political moment we are facing with the leftist authoritarians in our society, especially when he dropped that big “T” word. “See the thing right now -- what’s going on is tyranny. This is called tyranny. Look it up when you get home,” he urged his fans.

“And tyranny isn’t only in government. Tyranny right now is in the schools and tyranny is in the medical business,” he explained. He's correct. As Americans, seeing critical race theory and enforced mandates burdening our kids in public school, and seeing any semblance of open debate about vaccinations being absolutely crushed in the public square, we recognize the tyranny.

Mustaine continued: “We have the power, especially us … heavy metal fans, we have the power to change things.” Well as long as Mustaine and others like him are sticking out their middle fingers to the ambitious authoritarians in office, there’s plenty of hope.