The propagandists at PBS are furiously working to help smear 75 million Trump supporters with the actions of the Capitol rioters, and other instances of terrible behavior by fringe lunatics. 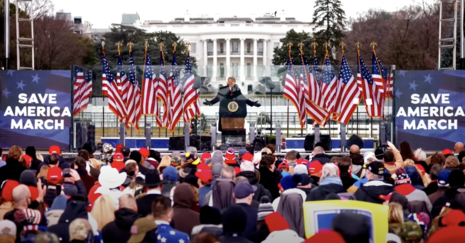 In a new PBS Frontline/ProPublica documentary due out April 13, the government-funded network will do its best to protect its masters, by saying that Trump and his movement caused all the extremist activity of the last four years, including the Capitol Riot. SPOILER ALERT: Antifa and BLM are never mentioned.

A very intense and dramatic trailer for the new documentary, titled American Insurrection, debuted on PBS.com recently. Of course, recalling the media’s reaction to a small group of crazies that broke off from the January 6 Trump rally and broke into the U.S. Capitol makes it a bit easier to see where PBS is going with their latest film, coincidentally part of their new reporting initiative Exploring Hate: Anti-Semitism, Racism and Extremism. Clearly, the documentary is about painting Trump and everyone who supported him as hateful extremists.

This has been their preferred strategy in spinning January 6, not to mention other events involving radical groups in America. American Insurrection’s trailer moves from the infamous riot in Charlottesville, Virginia, from 2017 – which Trump denounced – to the plot to kidnap Michigan Governor Gretchen Whitmer in 2020, all the way to the Capitol riot as a narrator urgently intones about "How the former president galvanized an army.”

Interspersed in and around narrator’s melodramatic words are quotes from then President-elect Joe Biden calling the Capitol riot “one of the darkest days in American history,” scenes of Proud Boys yelling that Trump is "their president,” and other nuts pointing out that since Trump is a “nationalist” their voices will be heard. This paints a sexy picture for the media doom slingers who have been wanting people to think that Trump is responsible for the depraved actions of these crazies.

In another instance, the trailer shows a quick cut of Trump speaking at his January 6 rally saying, “If you don’t fight like hell, you’re not going to have a country anymore.” That quote combined immediately with images of “far-right militias” conjures up a terrifying image no doubt. But still one devoid of context and the whole truth.

Everyone who watched Trump’s speech that day knows he meant conservatives need to generally “fight like hell” in the political arena, since the left is aggressive. Why didn’t the PBS trailer show the part where he told marchers to “peacefully” and “patriotically” protest at the Capitol building? Why didn’t PBS show when Trump denounced the KKK and white supremacists after Heather Heyer’s death in Charlottesville?

Will PBS acknowledge that Trump has denied “white supremacy” at least 19 different times?

At this point, PBS’s framing of the story in this fashion is stupid and irresponsible. People see through it and PBS should worry about looking like they're the ones fomenting hate.