INSUFFERABLE: Springsteen & Barack Obama On the Same Podcast Together?! 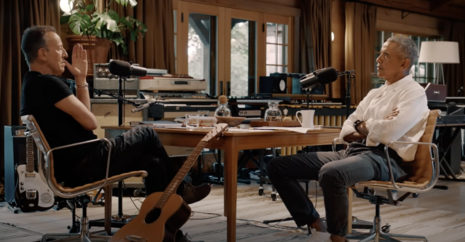 According to Entertainment Weekly, this mingling of the two liberal minds has already produced and published two episodes out of its eight episode season. The outlet reported that “Renegades” features the "duo in dialogue about everything from their similar childhoods as ‘outsiders’ to being role models to how to approach the divided state of America today.”

Well if we’re talking about American’s “divided state,” we’re expecting both Trump-hating Dems to give themselves a big ol’ pat on the back for achieving that. Ironically, Barry O asks at the outset of the episode, "How did we get here? How could we find our way back to a more unifying American story?" Oh that’s rich, guys.

Seriously, Springsteen and Obama haven’t exactly been steering America in a more unified direction, at least prior to a Democrat-led U.S. government. Now it’s all, unify for the sake of us getting our agenda done,  while during the Trump era, both Springsteen and Obama (his wife Michelle too) lambasted Trump and his supporters at every turn. Springsteen vigorously campaigned for Clinton in ‘16 and slammed Trump many times after the 45th president made it into office. The singer even wrote a ham-fisted poem about the “nightmare” in the White House during the last four years.

One of the stanzas talked about needing an “exorcism” in the Oval Office. So unifying!

And we don’t even have to go into Barack’s smug derision of conservatives over the years. His interview with George Stephanopoulos ahead of Trump’s re-election where he said he “continues to believe Trump will not be president,” provided a nice snapshot of his arrogance concerning the fulfillment of America’s radical leftist future.

The initial episode centers on the friendship that Springsteen and Obama began during the former president’s first campaign for president. In the episode titled, “Outsiders: An Unlikely Friendship” the pair “talk about their immediate kinship, borne out of their upbringings facing adversity head-on.” Springsteen harkened to living in a poor small town in New Jersey growing up while Obama made some allusion to sticking out like a sore thumb during his childhood in Hawaii. He wasn’t “easily unidentifiable,” he claimed. We assume he was referencing his skin color.

The rest of the episode featured a performance of Springsteen’s song, “Homecoming,” and included a conversation between the two about “how much has or hasn't progressed in America since they were growing up.”

Springsteen, who is currently worth $500 million, has been doing his part to cement the progressive future with fancy and patronizing SuperBowl ads urging people to come together under the new “ReUnited States of America.” Yeah we’ll unite under the America he likes. Sounds about right. Though too bad a recent DUI got in the way  of “The Boss’” messaging, and got his ad pulled within a week of airing.

And Barry’s just being Barry, making media content with his mega-million dollar partnership with Netflix and his book deals, and talking trash about conservative Americans and Trump every step of the way. Yeah both of these jokers are real renegades, the way they are shilling for the all-encompassing liberal machine that is now looking to brand grandma’s facebook posts as “domestic terrorism.” Real outsider stuff, boys.