Four years of garbage and hysteria thrown at Trump, his supporters and Republicans at large; smear campaigns directed at innocent SCOTUS nominees, the incessant media bleating of a Russian collusion hoax, and an actual impeachment vote designed to remove a president based on actual corruption of his political opponent. But hey, let’s forget about it, says Alyssa Milano and Bette Midler, two of the high-profile Hollywood conductors on this anti-conservative hate train. Now it’s time to be nice. 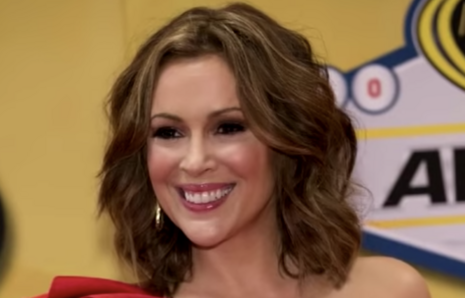 After apparent “President-elect” Joe Biden put out a mealy-mouthed tweet about “unity” on November 24, the entertainment media vipers retracted their fangs and became a lot more docile. Rabid anti-Trumpers Milano and Midler both turned down the heat of their usual hysteria and asked that everyone, Trump voters included, come together under their big umbrella of love.

Midler was the first to chameleon from hostile and mean-spirited to magnanimous and warm. The Hocus Pocus actress retweeted the Democratic candidate’s call that we “put aside the partisanship and the rhetoric designed to demonize one another,” and commented that she agrees. Midler wrote, “In order to put demonizing rhetoric aside, we have to stop searching for it, reading it, believing it, and reacting violently to it. We’ve become addicted to the rush of hating people we’ve never met.”

Oh wow, what a nice thought! Though for someone as partisan as Midler, it’s not to be trusted, particularly when her entire Twitter strategy is committed to spewing hatred against anyone she disagrees with politically. A mere couple hours after urging people to come down from the “rush of hating people we’ve never met,” she jumped right back onto slamming Trump, his family, and retweeting garbage from hateful MSNBC guest Steve Schmidt who was saying something about Fox News people being “race-baiting conspiracy loons.”

And a day before her conciliatory tweet, Midler had tweeted that the idea of “common good” was all but dead in this country because of selfish people who don’t respond to mask mandates or refuse the comforts of another several month long China plague lockdown. 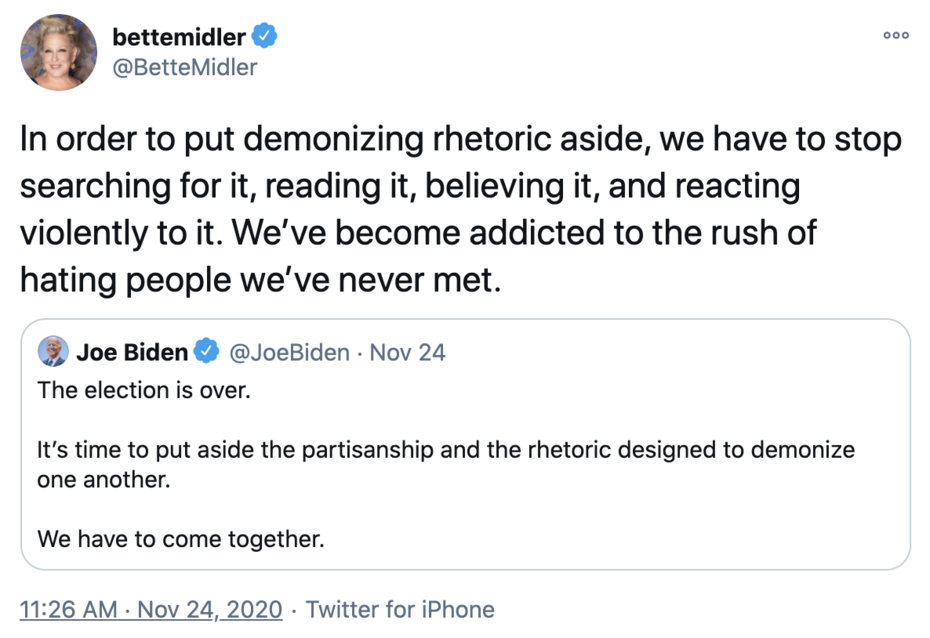 And then who else could forget her tweet which forever shaped her political legacy: the one in which she mocked African Americans at a Trump rally as “paid” to be there. Because, like Joe Biden, Midler doesn’t believe that real black people can vote Republican.

Left-wing nutcase and former Charmed star Alyssa Milano made the same plea. On Tuesday, the actress tweeted, “I’d like to extend an olive branch to Trump supporters. I am ready to move #ForwardTogether. There’s so much work to do to heal the nation. Let’s be a part of the solution and not add to the problems we face.” Oh she’s ready now? That’s convenient. 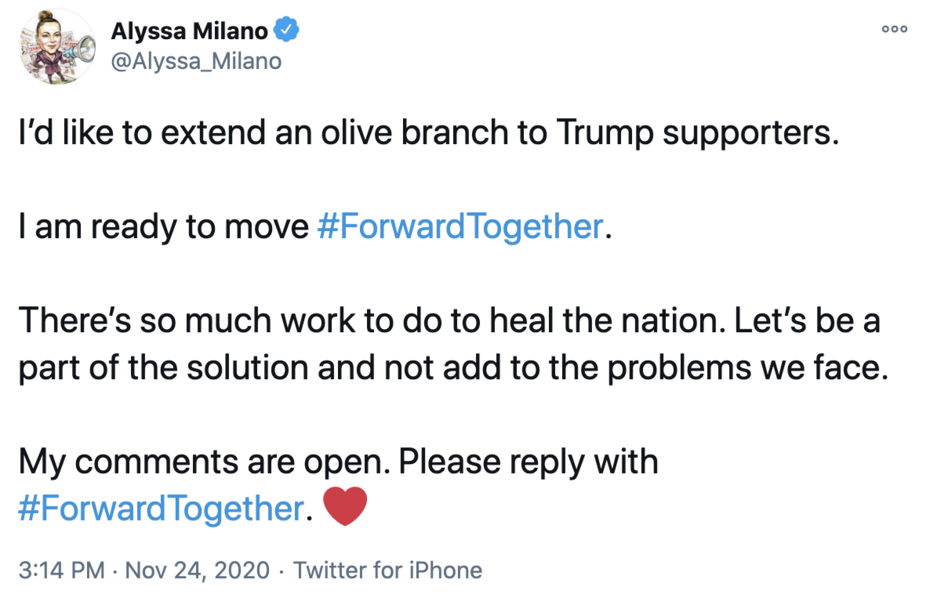 But remember, when Dems aren’t in power, Alyssa goes around accusing SCOTUS nominees like Brett Kavanaugh of raping women, and using her acting chops to do so. Who could forget the time she harassed Senator Susan Collins (R-ME) in her office? Milano broke down in tears and warned the Senator that her vote to confirm Kavanaugh would harm women.

Oh but when her preferred presidential candidate Joe Biden was hit with assault accusations more convincing than Kavanaugh, Milano defended him as a good man. She proved herself a major hypocrite who “believes all women” only when it’s politically expedient. And that one incident doesn’t include the constant hatred for Trump and his supporters she put on social media daily. Not to mention, she’s a rabid pro-abort who demonizes pro-lifers through her activism.

But NOW they want unity. Yeah because they’re both afraid they might get a taste of treatment they gave to folks under Trump, which they know was extremely nasty.