Streaming platform HBO Max took some serious social media heat at the beginning of this week, as footage from its latest documentary featuring a very young child being “accepted” at what appeared to be an LGBTQ-centric religious ceremony, made its way online. 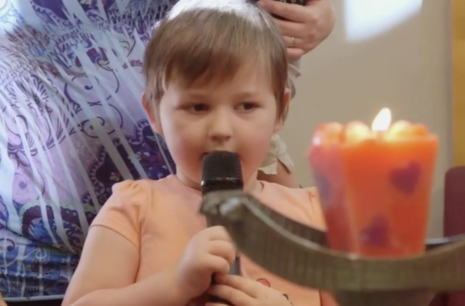 In response to the shocking clip, “#BoycottHBO” spread on Twitter on November 23 with conservative pundits like Michael Knowles and Matt Walsh decrying the entertainment giant for normalizing the exploitation of children.

The horrifying footage in question consisted of a minute-long clip from HBO Max’s new docuseries called “Transhood,” featuring a four year-old boy being accepted by his church community as a transgender girl. Of course the scene was presented as a beautiful coming together moment for a young person and his community, but to normal eyes, it came off as a disturbing ritual whereby a mother encourages her young child to embrace postmodern sexual norms in front of an adoring, radical leftist audience.

During the scene, the mother and her two young children were invited to the altar at a very unorthodox Christian church. Though there was hardly a reference to Christianity and nary a cross in sight in the rainbow festooned building. The scene also featured a female “priest” presiding over the ceremony.

The presider began the ceremony stating, “Today we choose to recognize, honor, love and celebrate anyone here who would claim their identity publicly as lesbian, gay, bisexual, transgender, queer or questioning, intersex, pansexual, asexual, or any category that I’ve left out.” Yeah … so not really Christian.

The real horror began when the mother and her biological son, “Phoenix,” walked  to the stage for the public declaration of his aberrant sexuality. In a very awkward moment, she introduced her son, whom the worship leaders handed a microphone so that “she” could tell the world “she’s” transgender. Though the boy tells his mommy he’s a little shy, she encourages him to tell the audience whether “you’re a boy or a girl.”

Of course, little “Phoenix” whispered to his mother, “I just want to tell them I’m a girl,” to which she said, “OK, you can tell them that.” Again the boy declined to speak out of shyness, (which appeared to be more of a red flag than anything at this point) so his mother took control of the mic to say “Phoenix would like you to know that she is a girl and she prefers ‘she/her’ pronouns.”

The clip closed out as the congregation looked on with pride while reciting a disturbing leftist prayer: “May you be well safe and whole, we honor you exactly as you are.” Though that’s hysterical because they were all ignoring the biological reality staring them in the face.

Horrified social media users slammed the clip on Twitter. The Daily Wire’s Matt Walsh accused HBO of child abuse, tweeting, “HBO is promoting and normalizing the most horrific forms of child abuse with its ‘Transhood” documentary. If you have HBO’s streaming service, cancel it. Don’t give your money to this evil. #BoycottHBO.”

Host of The Daily Wire’s “Michael Knowles Show,” Michael Knowles shared the clip over Twitter and remarked, “In a civilized society, this would be illegal.”

Former MLB player and conservative personality Aubrey Huff also shared the video on Twitter with the caption, “This is fucking child abuse. Any parent that confuses their kid like this should be in jail. And I’m being generous.”

Like Netflix’s child sexual exploitation in Cuties, the big media companies seem less and less concerned with the safety and well-being of children. It’s a ghoulishly disturbing trend. HBO Max subscribers should reconsider paying for their subscription.