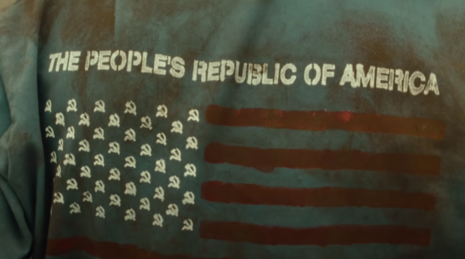 In their latest music video, the band flipped a giant middle finger to the establishment by mocking hypocritical mask mandates, and envisioning the American middle and lower classes as grunts enslaved by wealthy, smug elites.

The video, which premiered on October 15, appeared to depict a caricature of modern day America at its most over-the-top and grotesque. The social commentary involved images of smiling, dystopian figures demanding COVID compliance, for the sake of public health of course, average American consumers as brand-dead propagandized zombies, and the American working class as slaves in a communist U.S. of A.

It was quite the statement. In the video’s opening, zombies were shown walking the countryside, some of them pushing carts filled with toilet paper meant to remind viewers of the insane freak out at the onset of media-induced Wu-Flu paranoia. That scene was followed by shots of obese men in Iron Man and Captain America costumes at a bar snorting cocaine, binge drinking and eating.

Perhaps that was meant to be a dig at our pop culture, comic book heroes as truly worthless, vapid idols that do nothing for people, or have been so neutered to the popcorn-gorging masses that they can’t even embody specific values anymore.

In one of the video’s most provocative scenes, normal everyday Americans were depicted lined up in a room as an old woman with an air of importance inspected their ranks. As she marched down the line of citizens, she gave a COVID mask to a man, who put it on in a deliberate fashion as if it were a medal bequeathing ceremony. The woman, wearing a red button on her coat that had “Exempt" written on it, pinned a button on the same gentleman which reads “compliant” and had communist symbols on it.

The video continued by depicting slaves hammering away in a rock quarry while wearing shirts with American flags on their backs. Thought it wasn't what it seemed. The twist was that the 50 white stars of the flag were replaced with 50 white hammer and sickle insignias and the "United States of America" emblazoned above the flag was replaced with “The People’s Republic of America.” Was this meant to be the American working class slaving away for an abusive elite?

At the climax of the video, our “exempt” authoritarian leader – who looked like a mix between former Vice President Joe Biden and Speaker of the House Nancy Pelosi – pushed the cowed citizens too far with her dogs that she turned loose to loot and burn after seeing local businesses with American flags in their windows. (Antifa and BLM, anyone?) Fed up, Americans cast aside their masks and rushed onto a battlefield carrying American flags, perhaps symbolizing a new American revolution or second civil war.

The video ended with one of the Founding Fathers waking up from the events as if they were a dream from some future American hell hole. Creepy.

In an official statement about the video, Five Finger Death Punch’s guitarist Zoltan Bathory explained that it wasn’t necessarily anti-mask as it was anti-hypocrisy. “The mask segments are about hypocrisy on the highest level. When the rules are made for you but those who made them are exempt. Pretty much the standard in all dictatorships and totalitarian regimes.”

In response to critics who found the images disturbing, Bathory also claimed, “If I must explain this, the whole video is in the frame work of fiction, a dystopian nightmare of one of the founding fathers - right before he signs the constitution.”