BuzzFeed Wants Sympathy for Toobin: Haven’t You Taken ‘Three Minutes’ to ‘Crank It?’ 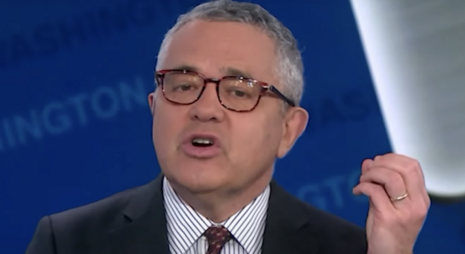 BuzzFeed’s attitude was essentially, Everyone does it, y’know? It’s just unfortunate that Toobin got caught. Um, no thanks, BuzzFeed. Toobin’s a pig and should be fired, not just suspended from both media companies as he was.

BuzzFeed News recounted Toobin’s incident in their own signature way, that is, disgusting and infantile. The piece explained, “At one point, Toobin seemingly joined a secondary call, lowered his camera toward his penis, and allegedly — and I believe this is the technical term here — cranked it real good.” Oh nice, there’s that irreverent millennial charm the outlet is known for.

Even worse, they added, “Toobin told Motherboard [the outlet that broke the news] that he didn’t know he was visible on the call while allegedly making mayonnaise.” That description alone should be considered journalistic malpractice.

BuzzFeed is cursed. We knew that. Foul prose about the incident aside, our writer began the piece by referring to the event as a “tremendous scandal” that had “everything: a high-profile media person, his penis, a Zoom nightmare come to life,” but then strangely moved into a humanizing missive on giving Toobin the benefit of the doubt. “Haven’t we all done something on a work call that, in normal circumstances, we’d never do during a meeting?” Oh, what? Now they’re asking us to relate to this animalistic garbage?

Yes, or at least cut Toobin some slack. BuzzFeed had the nerve to employ a Bible verse to protect the honor of a man – a man with some air of intellectual leadership in the media – who couldn’t make absolutely sure that his basest private moments were kept off a New Yorker staff meeting. BuzzFeed stated, “Let he without sin cast the first stone; the benefit of working from home is in the comfort to do whatever you want.”

To be CNN’s Legal Analyst doing this at work essentially, is one of the grossest things we’ve ever heard. We’re extremely embarrassed for Toobin, a guy who is held as some authority on presidential decorum on CNN panels, but does that would make former President Bill Clinton blush.

But hey, that’s too harsh. The publication invited us Pharisees to look inwardly, asking ourselves, “You’re going to tell me you’ve never taken a quick three minutes midday to crank your hog?” Isn’t this an insulting question to BuzzFeed’s audience? Well, considering who earnestly reads this crap, perhaps not.

Of course, the piece continued by rationalizing that “our home lives and our work lives have fused more and more, it was inevitable that the cracks in our professional demeanors would start to show.” But again, this isn’t hopping on a Zoom call without make-up, nor the classic “not wearing pants” below the camera line, this is a grown man who can’t control his sexual impulses during a high level company meeting, something all men – ESPECIALLY in the #MeToo era – are expected to do.