The impeachment trial of Donald Trump seems to be winding down without promise of Trump’s head on a platter, and that makes Hollywood leftists seethe.

Hours after notable Republican flake Sen. Lamar Alexander (R-TN) declared that he would not be seeking extra witnesses to drag this sham on for eons, it started to appear that acquittal was on the horizon.

And even though everyone knew that was coming, vocal lefties in Hollywood declared the death of democracy and begged the universe to cough up something — anything — from Trump’s past to make him look bad. Ellen show producer Andy Lassner became particularly unhinged with it, asking the Twitterverse to find evidence of Trump’s “abortions.”

Lassner posted a disturbing tweet. He wrote, “Well it looks like there may be new rules. So, attention world: If you have proof of any abortions Donald Trump may have paid for, send ‘em over. All of his texts, emails and phone calls would be cool.”

Lassner added, “All his promises/love letters to Putin, MBJ[sic] and other despots are welcome.” (Mr. Lassner meant “MBS” for Mohammad Bin Salman, the Crown Prince of Saudi Arabia.) Sorry, Andy, tamp it down, man. 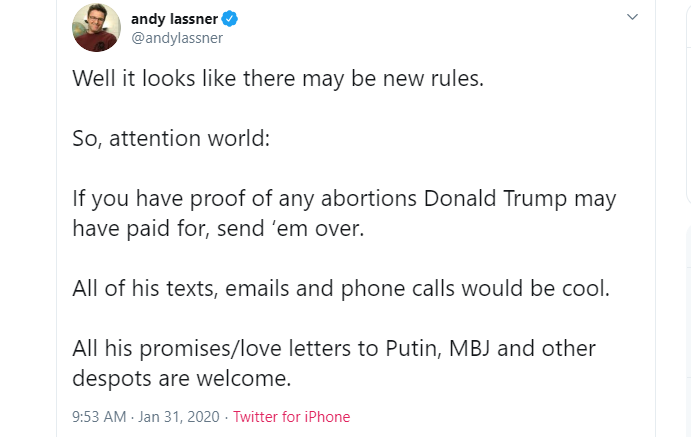 And finally! After years of warning about the death of Democracy, actor/director Rob Reiner declared it has happened, well provided the vote to acquit happens. The gentleman tweeted, “First time in the history of American jurisprudence that an indicted criminal who is proven guilty beyond any doubt is allowed to walk. A Republic if you can keep it.” Bad news for psychotic When Harry Met Sally directors, but good news for voters.

Ice Age sloth voice actor John Leguizamo advocated for putting several GOP senators on a list for voting against witnesses. He tweeted, “We should #canaryMission Republicans who don’t vote for witnesses! #LisaMurkowski #SusanCollins #MittRomney #LamarAlexander and the democrats who would defect @DougJones @Sen_JoeManchin @SenatorSinema.”

Onscreen tough guy Ron Perlman tweeted about prosecuting GOP senators who are voting against witnesses. The Hellboy actor wrote, “I don’t need no cracka tellin me what’s as obvious as sunshine! What I need is a functioning democracy where people who defend lawlessness go to the big house for some salad tossing.” Very authentic, very street.

C-list actor Bradley Whitford lashed out at Sen. Ted Cruz. He tweeted, “If you don’t think Trump is a cult, how do you explain @tedcruz enabling a man who mocked his wife’s appearance and accused his father of conspiring to kill JFK? WTF?!?!” Well being professional is a concept Whiftford may not fully comprehend.