She’s a former stripper turned rapper. He’s the aging star of the 1988 classic Honeymoon in Moscow. They’re teaming up for the zaniest buddy-comedy/caper picture of the political season: Booty and the Borscht! 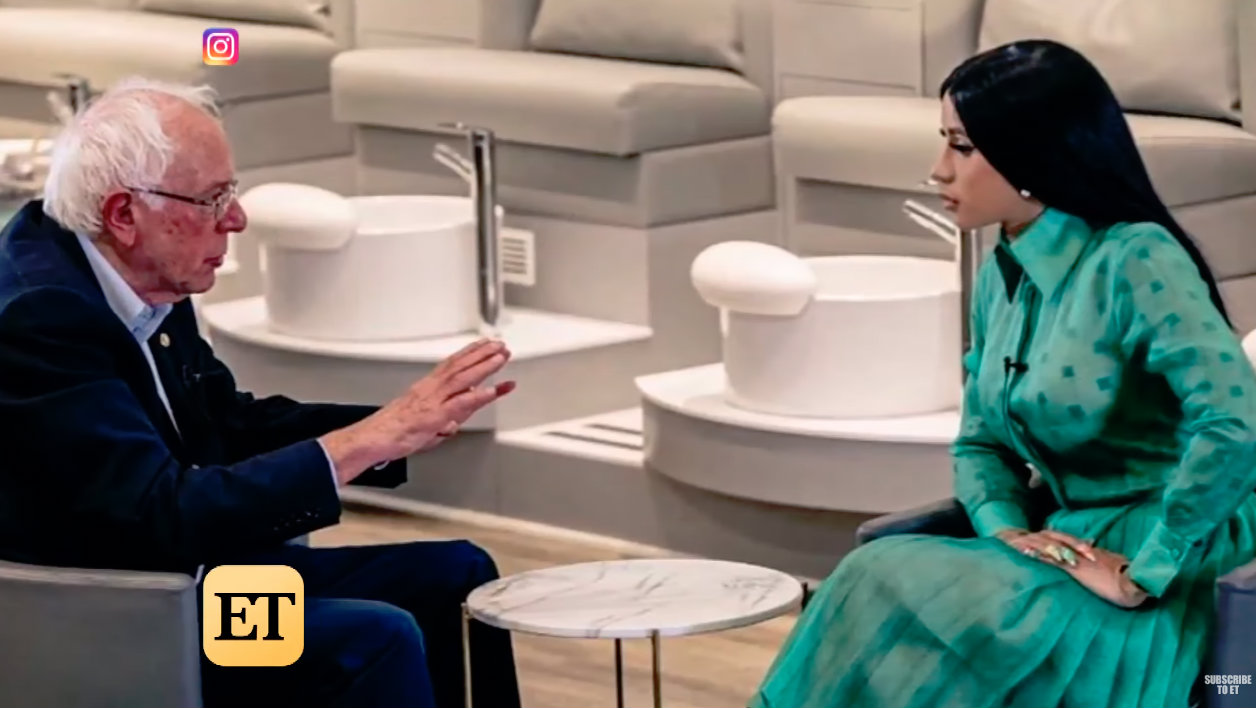 Socialist and 2020 contender Bernie Sanders is attempting to bolster his approval among America’s young people, and his strategy involves doing some savvy political video streaming with rapper/ghetto mouth extraordinaire Cardi B. It’s the perfect match. Both just love stealing from rich people.

In an interview with CNN, the senator from Vermont stated that “We [are] working on a way to involve more young people in the political process … The future of America depends on young people. They are voting in large numbers, but not large enough numbers.” So what’s a whacky old socialist to do? Well commit completely to the idea that the only way to reach these young whippersnappers is through that hip hop music they’re playing on the radio these days.

So, ugh, now we get more political diatribes from Cardi B. The lady barely speaks English, produces seedy rap music filled with profanity and graphic sexuality, and has admitted to drugging and stealing from wealthy patrons during her stint as a stripper. BUT she has a massive social media presence and routinely uses Instagram to spout off boilerplate Democratic talking points, (that is if you can make them out amid all the grotesque sex talk) so lefties are smitten.

Sanders and Cardi joined efforts to make a 2020 presidential campaign video for the Democratic star, broaching lefty topics such as “canceling student debt, climate change and raising the minimum wage.” The venue where they filmed was the TEN Nail Bar, a “local nail salon owned by two black women.”

Cardi B has been a fan of Sanders and his positions for some time now. Two weeks ago, the rapper gave the “democratic socialist” a shoutout on Twitter, claiming, “I been reading about Bernie Sanders and I’m really sad how we let him down in 2016 This man been fighting for equal rights, HUMAN rights for such along time.” Oh Cardi, sounds like you both have been duping each other. Be careful, there’s no honor among thieves.

Sanders flattered the hip-hop star as well, telling Jimmy Kimmel during a late night appearance last week that “She is really smart. And she is deeply concerned about what's happening in this country ... She wants to make sure we improve life for working people in this country, and I'm delighted that she is a supporter.”

Sanders reportedly has been smitten with Cardi B since 2018, when she told GQ that Franklin Delano Roosevelt was “the real ‘Make America Great Again’” president. Sanders frequently cites Roosevelt in arguing for Democratic socialism and his single-payer “Medicare for All’ plan.

After their recent campaign video production, Cardi posted a photo of her and the candidate discussing the ideas (like how to reconcile their love of Asian internment camp-building FDR with their brash disapproval on kids in border camps — just kidding) and thanked him for the opportunity. She wrote, “Not me, US. Thank you Senator Bernie Sanders for sitting with me and sharing your plans on how you will change this country.”