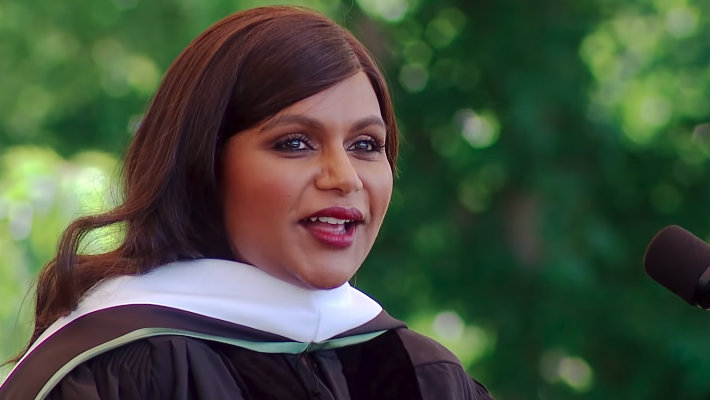 Ah, graduation season. A time when fresh young minds leave their liberal ivy league bubbles, but not before receiving one last course of progressive indoctrination at the hands of some tinseltown pop culture politician.

This past weekend, Dartmouth University’s Class of 2018 received their diplomas and a charming send off from Dartmouth alum, Mindy Kaling. Kaling, the lovable and feisty (more like ditzy and painfully high-maintenance) female co-worker from NBC’s The Office, and one of the principle writers behind this year’s all-female reboot of the Ocean's 11 series, took aim at Donald Trump and the gender wage gap in her commencement speech.

This is just becoming way too predictable.

Kaling managed to get in a few deprecating remarks towards the president, treating his trademark high confidence and winning-at-all-costs presidential attitude as delusional. “I’ll tell you my secret, the one thing that keeps me going, my superpower: delusion,” she said, prior to delivering her Trump-toppling knockout blow. “That is something I share with the president, a fact that is both horrifying and interesting.”

Mindy also referenced Trump as the best example of uncompromising belief in oneself, and encouraging students to see how much it helps to have “insane confidence,” even if it’s not real.

Get it? Because that’s like Donald Trump. Wow, these celebs are always so on the money!

Besides being a graduate of Dartmouth in 2001, Kaling’s claim to progressive fame is that she “was the first woman of color to create, write, produce and star in a comedy show,” The Mindy Project. Of course, being such a stereotype-crushing Hollywood force has given Kaling the authority to rebuke millions of young men for their better fortunes in regards to the dastardly gender wage gap.

Before addressing the female graduates on the power of resistance in a chauvinist world, Kaling told the male audience to reflect: to “spend the next 30 seconds thinking about the extra money they will be making for doing the same job as a woman.” She then told the ladies about the importance of supporting one another, adding the question, “Wouldn’t it be better to work together to dismantle a system that makes us feel like there’s limited room for us?”

Yeah, but to all you men out there. Screw you! This is about one group of people uniting, away from another group of people. Yeah, Mindy, you and your faux-intellectual constituents seem to be really racking your brains for ways to achieve world peace or at least a more unified political climate. By all means, keep utilizing that lefty identity politics playbook. That’s been working out so well for liberals’ credibility lately, hasn’t it?