The 48-year-old actor spoke at the Austin, Texas March for Our Lives, stating that he was there because he’s an American citizen, a proud Texan, a March for Our Lives believer, and, most importantly, because “I’m a father and I’m a husband.” Though he claimed that he wasn’t advocating for gun control, he asked that Second-Amendment supporters “take one for the team.” 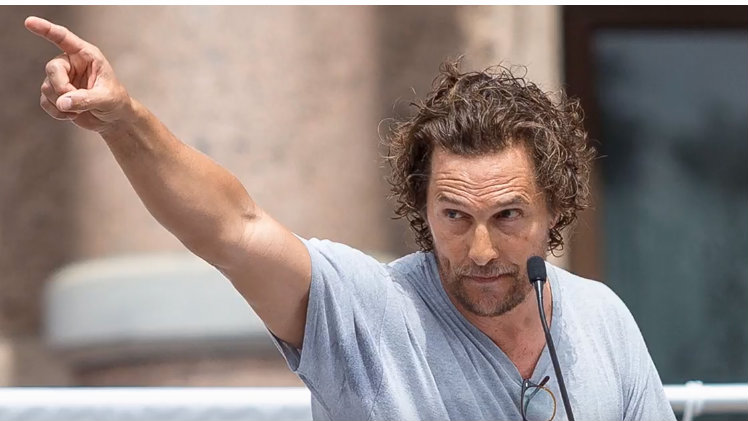 McConaughey, a famous face at the gun-control rally, announced that he didn’t attend for the sake of subverting the Second Amendment, but that he wanted America to acknowledge that it is in the middle of an “epidemic.”

“Now like many of you in the South, and many of us here in Austin, Texas, and all around our great state, we grew up hunting,” he said. “But I want to be clear that today’s march is not about taking away the rights of law-abiding American citizens to buy own and bear arms.”

To the surprise of no one (especially conservative gun owners), McConaughey turned around, adding that, “At the same time, let’s admit that we have an epidemic in our country right now that we need to fix.”

If you say so, Matthew. He then asked law-abiding American citizens to put their Second-Amendment pride on hold for the sake of a safer country that needs healing.

“Let’s ban the assault weapons for civilians. This is a no-brainer,” he claimed. “And to my friends out there that are responsible owners of these recreational assault weapons that they use for recreation, please let’s just take one for the team and set it down. That issue saves lives.”

The actor continued his speech by asking for the capacity of rifle magazines to be regulated, saying that in Texas, “we have a three shell limit to hunt migratory birds. Do the math. You get my point.” He also demanded that background checks require tighter regulations and that the loopholes therein are done away with.

And of course, the actor concluded his list of demands with his signature Hollywood line.

After all, maybe conservatives’ disagreement on the gun issue is just bitter partisanship, and not a valid point of view. And hey, with leading-man charm that intoxicating, how can any gun-owner say no to his list of demands? Nice propaganda there, Hollywood!