Racism is evil and it should be spotlighted and shamed whenever and wherever it manifests. Unless doing so would be awkward for Democrats. Then, just move along, nothing to see here. Louis Farrakhan is brazenly anti-Semitic and proud of it? 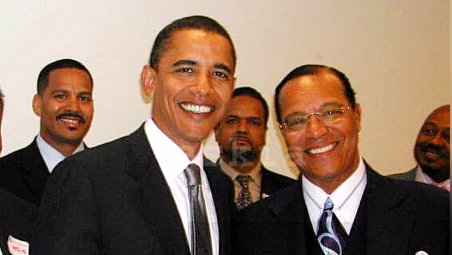 In case you missed it -- and there’s a good chance you did, thanks to the silence from ABC, NBC, and CBS -- “Nation of Islam” leader Louis Farrakhan has resurfaced as he does every few years and makes horrible noise for a while. The old crackpot gave a speech last Monday during which he said that Jews “were responsible for all of this filth and degenerate behavior that Hollywood is putting out, turning men into women and women into men.”

Now Louis Farrakhan as erratic racist is hardly surprising -- he has called Jews “satanic,” and has said that Hitler was a “very great man.” What is surprising is the reluctance of the supposedly responsible legislators of the CBC to denounce him. That and the fact that the leadership of the progressive Women’s March treat Farrakhan affectionately, like a kooky old uncle.

CNN’s Jake Tapper wasted no time calling out these hypocrites. He blasted the Women’s March co-chair, Tamika Mallory, who was in attendance for Farrakhan’s speech on “Saviour’s Day.” Linda Sarsour, the other co-chair was complicit as well, siding with Mallory in a twitter debate that included Jews and several other anti-Semites. Tapper was flabbergasted that both Mallory and Sarsour insisted on defending Farrakhan.

Not surprisingly, some supporters of the March condemned Mallory and demanded that she resign. Patricia DeRush tweeted, “Resign as self-designated leader of @womensmarch. The bigotry espoused by Farrakhan has no place in what that March was all about. You tarnish the beauty of the March.”

Several members of the Congressional Black Caucus have also been exposed as Farrakhan’s associates, including Maxine Waters and Danny Davis. Tapper went after Rep. Davis of Illinois, who has before told reporters of the Daily Caller that he considered Farrakhan an “outstanding human being.” Despite Tapper’s criticism, Davis clung to his support of Farrakhan and dismissed the anti-semitic accusations, saying “the world is bigger than him and his Jewish question.”

Perplexed by the entire situation, Tapper asked, “Why is it so tough for some people to condemn a rabid anti-semite who is also a misogynist and anti-LGBTQ?"

The Republican Jewish Coalition also listed the names of seven democrats who have met with Farrakhan, calling for their resignation. In addition to Reps. Davis and Waters the other names included Reps. Keith Ellison, Barbara Lee, Andre Carson, Gregory Meeks, and Al Green.

Several of these representatives have since gone on record to denounce anti-Semitism, but have yet to denounce Farrakhan.

This all came out about month after a controversial photo was released of Barack Obama and Farrakhan cozying up at a Black Caucus event in 2005. (CBS made a mention of that.) The photographer admitted that he suppressed the photo because he didn’t want to hurt Obama’s presidential ambitions.

If that was Donald Trump and David Duke, the billionaire would’ve been run out of town as soon as the photo was taken. The fact that ABC, NBC, and CBS still haven’t mentioned the Democrat-Farrakhan problem just proves that this is the media’s hypocrisy at its finest. Oh, so they have real ties to Jew-hatred, but I can’t use the word “globalist” anymore.