Ed Asner Jokes About Trump's Sons Being Mauled By Lion

Proverbial crazy old liberal, Ed Asner thinks he’s a real funny guy. On Tuesday morning, Asner took to twitter to try out an outlandish joke. He shared a recent National Geographic report on a poacher who was devoured by lions at a game reserve in South Africa last Friday. Not being able to resist, the former president of the Screen Actors’ Guild asked the twitterverse if anyone had seen Eric or Donald Trump Jr. lately, implying that they were the victims of the mauling. Wow, you really showed those conservatives, you crazy old coot. 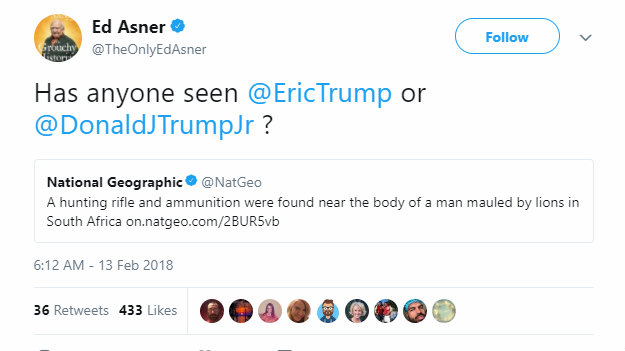 For those readers who are too young to know who Ed Asner is, (which is probably most) he was a large player in Hollywood back around the time of Charlton Heston. He was also a fanatic liberal who loved to denounce Reagan, was friends of high-level Sandinistas, and more recently, a 9/11 truther. He was reported to have threatened to punch out Heston, and stated that Reagan’s economic policies were “urinating in the mouths of workers.”

Concerning his Trump joke, of course, lefties on twitter love this kind of thing. A little gallows humor to really stick it to those in power, especially Donald’s sons. What else is new? In fact, just earlier today, liberal social media was foaming at the mouth to really stick it to Trump Jr.’s wife, following her hospital visit. She was reported to have gone in as a precaution after receiving an envelope containing a suspicious white powder.

Upon Donald Trump Jr. tweeting that everything was fine, and adding that it’s “disgusting that certain individuals choose to express their opposing views with such behavior,” many progressives on twitter responded with the usual Trump-bashing bitterness.

Here is just another couple of examples of progressives’ “love trumps hate” mentality. Preach about how much peace and diversity you want to see in the world, and then the next minute step all over it, while at the same time destroying any standard of human decency. Yeah, but Trump’s comments? Those are just downright mean.