There’s nothing worse than liberal celebrities spouting political commentary — except when such comments are unfounded and serve as a sort of pied piper for younger generations.

Cultural icon and Pink Floyd co-founder Roger Waters recently sat down with HuffPost Live and discussed his views on Israel’s “oppressive regime” and ill-treatment of Palestine. Waters stated that his involvement in the BDS (boycott, divestment, and sanctions) movement began back in 2006, giving him plenty of time to be well-versed on the issue.

Waters claimed that the BDS movement is a non-violent, peaceful protest against the Israeli government “occupying territories,” specifically referring to the West Bank and the Gaza strip.

He began by justifying his high level of criticism towards Israel, remarking:

He went on to note that his criticism was not towards the Israeli people or against Judaism -- and he most certainly was not anti-Semitic!  In fact, Waters explained, the reason why people think he is anti-Semitic is because they can’t see the “evil” Jewish state as he does -- a nation that bombs Gaza and engages in a “creeping genocide.”

What Waters fails to understand that is that Israel is a nation state specifically created for the Jewish people. Waters’ hatred for Israeli policies and his sympathy for Palestine falls right in line with the anti-Semitic dialogue. He ignores the historical fact that Israel was complicit in the United Nations giving Israeli land to the Arabs and granting them the ability to live under Palestinian authority, which they have rejected.

Waters also conveniently turns a blind eye to the fact that it is Palestinian terror groups such as Hamas that launch deadly attacks on Israelis and even jeopardize its own people, with the goal of destroying the Jewish State. 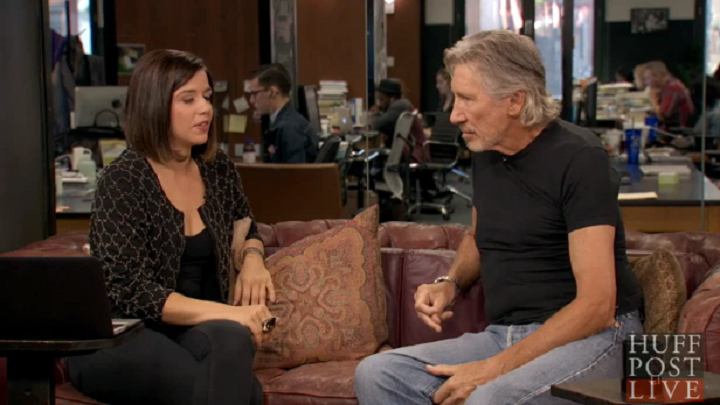 But never mind those details. Waters continued the interview expressing that criticism towards him and other pro-Palestinians started with Prime Minister Netanyahu and pro-Israeli groups such as AIPAC (The American Israel Public Affairs Committee). He commented how the recent Iranian deal has made him even more vulnerable to such criticism:

…Netanyahu goes on TV and makes ludicrous speeches about how they’re [Iran] trying to destroy Israel blah blah blah blah, and it, and it, that becomes part of a conversation when in my view it shouldn’t be and his interference with the U.S. Congress was, um, completely stepped beyond all lines of what diplomacy should be about. What business does he have speaking to the Congress of the United States of America?

HuffPost Live host, Alyona Minkovski agreed wholeheartedly and even added most of the American public support the Iranian deal. Minkovski ignored that polls show the opposite -- a majority of Americans are opposed to the deal and there is growing public skepticism towards it.

Ultimately, Waters concluded that most of the criticism he receives for his support of BDS is because his critics have no argument. He claimed it was easy for someone to call him anti-Semitic, rather than have a “conversation.”

At least Waters admits early on that he is always prepared to be in the wrong — which, in this instance, he is. First of all, he refused to acknowledge the anti-Semitic beliefs and flat-out hatred for the Jewish nation that characterize the BDS movement. Secondly, he has no justification for bashing Prime Minister Netanyahu’s comments before Congress. After all, Iran has made public  its mission to wipe Israel off the face of the earth. And seeing as how the United States is an ally of Israel partaking in a dangerous deal with the terrorist nation, Netanyahu has a great deal of business speaking before Congress.

So unfortunately Roger Waters contradicts himself—he does in fact seem to have some anti-Semitic bones in his body after all.