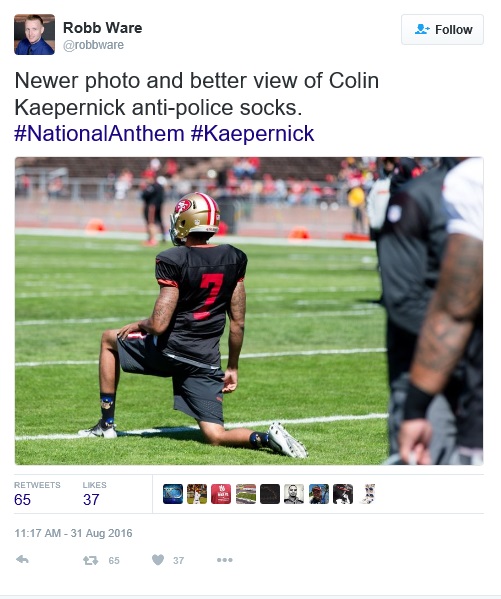 The pic was snapped just over three weeks ago at 49ers camp. While, Kaepernick was stretching. But wait! Kaepernick claims the socks are only meant to address bad cops.

“I wore these socks, in the past, because the rogue cops that are allowed to hold positions in police departments, not only put the community in danger, but also put the cops that have the right intentions in danger by creating an environment of tension and mistrust,” Kaepernick wrote on Instagram. “I have two uncles and friends who are police officers and work to protect and serve ALL people. So before these socks, which were worn before I took my public stance, are used to distract from the real issues, I wanted to address this immediately.”

Kaepernick’s refusal to stand for the national anthem before last week’s preseason game thrust him into the forefront of a national conversation, a conversation that will continue as Kaepernick again refuses to stand before tonight’s game.

Kaepernick, however, seems to view the socks as a distraction from that conversation. It seems a little silly to be focusing on someone’s socks, but it’s a safe bet that everything Kaepernick says, does and wears will be scrutinized this season.”

It’s silly to focus on socks that depict cops as pigs? Okay.

But no matter. The socks were worn “in the past.” You know, three weeks ago, when it was totally cool to mock the police as pigs.

So, if you’re keeping score at home -- and I know you are -- in one preseason, the NFL has declined the Cowboys request to wear decals in support of the Dallas Police Department, yet appears ready to allow a QB who wears ‘Pig Socks’ to go unsuspended and play in the preseason.