Admittedly, I’m torn as to whether what happened on Wednesday night’s edition of Blackish constitutes actual bias or just a really bizarre commentary on the self-perception of African-Americans in society.

But, since those two emotions/realities/states-of-mind overlap so frequently, I figured I’d give it a shot.

In this particular episode, titled ‘The Johnson Show,’ Dre’s (Anthony Anderson) company is going through a round of layoffs, and he’s freaking out. In comes Dre’s father, Pops (Laurence Fishburne), to try and cheer him up.

Which leads to this weird exchange:

Pops: Son, what the hell are you doing?

Dre: I'm trying to protect my job, Pops. It's getting serious at work.

Pops: Oh, it's okay, son. Anything happens, you got a rich wife to take care of you. That way, you can go back to your herb garden, which by the way, was not at all what I thought it was going to be.

Dre: You think this is a joke? This is my life, man.

Pops: Oh, calm down, boy. Everybody gets laid off. Hell, I told you. Even I got laid off.

Dre: You did not get laid off. You were escorted out by the police because you embezzled 12 grand.

Pops: Reparations! And not even close to what they owe us.

Pops: Well, not anymore, they don't! Listen, all I'm saying is losing your job is not the end of the world. You're a moderately competent man. You'll be fine.

Dre: Pops, it's about more than losing my job. Do you know what happens to me every time I drop the kids off at school?

Woman: Oh, my God. What a beautiful family!

Dre: What she's actually saying is...

Woman: Oh, my God. You're a college-educated, two-parent, married, hardworking, well-spoken, no-baby-mama-on-the-side-having, full-tuition-paying family, and neither one of you is an actor, athlete, rapper, or drug dealer?

Dre: They're surprised to see us doing what every other family at that school is doing -- being a family. Why do we get all the attention?

Pops: Well, you don't exactly fly under the radar with your Benz and high-top sneaker-boot tennis shoes.

Dre: There's so few of us up there, I got to represent. It's a lot of pressure keeping this perfect picture together. It's probably how Will and Jada feel.

Pops: Hold up. You're comparing yourself to the biggest movie star in the world?

Dre: You're right. We're more like Barack and Michelle. Can you imagine if Obama did what Clinton did in the Oval Office? I heard he had all the doors removed to take away any suspicion. Oh, six more months, Barack. Let's just keep it together. Hey, Pops. Why do we always do this?

Reporter: Police have described the gunman as a...

Dre: But seriously, man. When one black person fails... It feels like it sets us all back.

Dre: Yet. But there are people out there waiting for me to.

Pops: Okay, I understand what you're saying. Times have changed. We got a black president, we've got big movie stars, and you feel like you're a part of that.

Pops: You've got to maintain.

Pops: You've got to hold it down. I understand. That's a lot of pressure. Good luck with that. Now, if you'll excuse me, I need to go, uh, tend to my own herb garden.

Okay, hilarious. As this show normally is. Yet, I think one could watch that scene and be easily forgiven for coming away with the impression that all white people do is think about black people.

Now, first things first. The show asks and answers its own question. The reason why upper-income, non-athlete black families get noticed is because there relatively few of them. That should be pretty easy to understand. 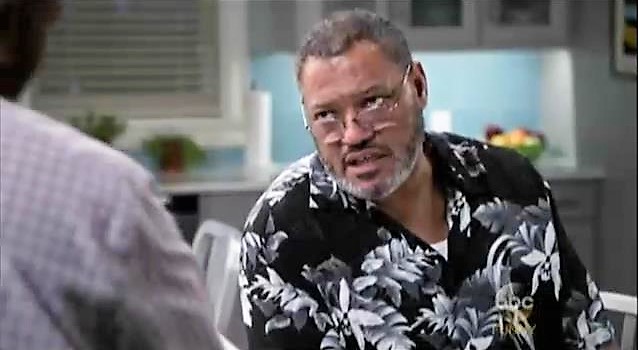 But do the writers at Blackish really believe that white people gather and lurk like vultures, just waiting to pounce on the still-warm remains of any black person who fails at life? Is that why so many white people vote to have their money taken away from them by the government, and spent on often-useless and wasteful, but well-meaning government programs to improve health care and education in black neighborhoods?

So they can mock and laugh at them when they fail?

I can’t speak for all palefaces. However, I will say that my mind is far too busy, obsessing over my own potential to fail at life, to sit there and obsess over anyone else’s.