Because this is the job of a sports reporter, Brian Alee-Walsh, who covers the New Orleans Saints for the Sun Herald, reacted to the death of former New Orleans Saints defensive lineman Will Smith by…wait for it…calling for gun control.

In an article titled, ‘Smith’s Death Opens Debate for Stricter Gun Control Laws’ (its totes adorbs that he thinks the debate over strict gun laws was ever closed, right? Like the 2nd Amendment was ratified in 1791, and then just lay dormant and untouched for over 224 years until this weekend), Alee-Walsh informed one and all that the great gun debate hath commenced: 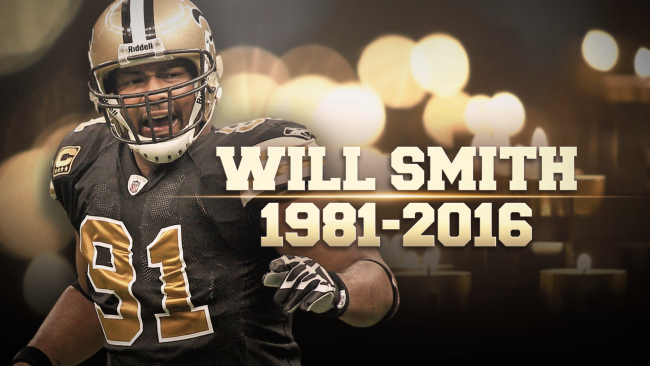 “Some might argue that this is not the proper time to debate the merits of stricter gun control laws, nor demand increased police presence on our city’s streets, especially so soon after the fatal shooting of former New Orleans Saints Pro Bowl defensive lineman Will Smith.

So you tell me: When is the right time? Before or after the next senseless gun-related death? Or, is there any solution to the ongoing epidemic, any middle ground at all, that we can agree on?

I am sick and tired of hearing guns don’t kill, people do. Tell that to Smith’s surviving wife, Racquel, who was wounded in the incident, and their three young children.

As background, Smith and his wife reportedly ran afoul of a man shortly before midnight Saturday after they were involved in a multi-car accident in the city’s Lower Garden District.”

Well, since he asks, I suppose the right time to have the gun debate is when stricter gun laws actually result in less crime. But, since the 10,000-year forecast in Hades is still showing no sign of an impending freeze, I’m not sure that’s really going to work within Mr. Alee-Walsh’s tenure at the ol’ Sun Herald.

“Prayers and condolences poured in Sunday from friends, former Ohio State and Saints teammates and coaches and other well-intentioned leaders, such as NFL Commissioner Roger Goodell and New Orleans Mayor Mitch Landrieu who called the killing “a tragic loss of life” and “senseless.”

It is on both counts.

Ironically, only hours before Smith’s death, New Orleans voters rejected a proposal to hike property taxes, that if passed, would have expanded the Police Department and theoretically helped to improve public safety.

Voters did approve a proposal Saturday that will throw more money toward street repairs, ensuring smoother rides perhaps but offering no promise of safer streets.”

Aha! You see?! It was those pesky voters and their decadent desires for a “smooth commute” that kill people! If only voters would eagerly surrender all their hard-earned gains to the government, then they would receive every security and the streets would be safe.

Because that has worked so well in cities like Chicago, Detroit, New Orleans, Washington, D.C., St. Louis…