CBS' 'Madam Secretary' Clears Hillary of Any Fault for Benghazi

CBS’ Madam Secretary has just about succeeded in turning the office of Secretary of State into the most important government post in the history of history. In an episode titled “The Doability Doctrine,” Secretary McCord (Tea Leoni) becomes extremely miffed that the President has decided to entrust his CIA director with resolving the case of a captured American Foreign Service Officer in Kabul.

So, what does our scorned chief diplomat do? Well, she talks to Madeleine Albright. Duh:

>> Conrad's all about his new golden boy, and I'm stuck playing second fiddle. More like they took my fiddle and gave it to Craig Sterling.

>> So are you telling me that the president has given you the Heisman?

>> Yes. Yes. Which is pretty galling, considering that I-I didn't even want the stupid job in the first place. No offense.

>> Well, admittedly, it has grown on me. But now that I feel like I've been relegated to the outer sanctum, I... How do I get back in?

>> You do know about my Doability Doctrine?

>> I do. "Where our interests are clear, "Our values are at stake "And we can make a difference, we must act and we must lead."

>> Right. And that doesn't apply just to international politics. It applies to office politics, too. Look, there's plenty of room in the world for mediocre men. There is no room for mediocre women. And so you have to lead.

>> That's a little difficult now that the president has... Obviously made up his mind and gone along with Sterling.

>> If you're gonna go down, then you've got to fight. Hard. And you got to hit him where it hurts.

No place in the world for mediocre women? Someone has clearly never heard of Sheila Jackson Lee. But by making this comment, Madam Secretary sets up the exceedingly false premise that only exceptional women survive and thrive in high office. Specifically, to convince you, the viewer, that Hillary Clinton is an exceptionally talented and gifted woman, since the entire point of this show is to convince you to vote for Hillary.

The problem with this of course is that Hillary’s own professional career gives lie to the idea that only exceptionally gifted women thrive in politics, since no one can really identify what her “gift” actually is. Her prominence and name recognition in politics, in addition to the only electoral success she’s ever had, can be directly traced to her marriage to a former President. And the highest office she ever held was a consolation prize handed to her by the man who beat her when she ran for President the first time.

However, consistent with Madam Secretary’s true purpose of addressing and neutralizing all of Hillary’s most vulnerable weaknesses, they save the best for last. Watch how “Madam Secretary” deals with the President’s aborted rescue attempt of the captured Foreign Service Officer and some U.S. contractors in an incident eerily reminiscent of Benghazi. Because that’s exactly what it’s trying to do:

>> Copy that, Commander. Can you see the package?

>> Negative. Descending. Oh, wait a second. I have four men at the lz.

>> Can you visually confirm the package? Over.

>> Hold. Yes. We have visual confirmation on the package. We're going down.

>> Taliban must have been tipped by locals.

>> We have Garrity, Admiral. Permission to evacuate? Over.

>> We cannot leave them. We gave them our word.

>> We got our guy-- we absolutely can and should evacuate now.

>> The Taliban is still our enemy. We have a Black Hawk with two m-134 miniguns and 30 seals armed to the teeth with m4 carbines! That is more than enough firepower to wipe them out.

>> Get them out of there. Evacuate. Permission to evacuate granted.

>> I can't justify spilling our troops' blood to save them.

Which is obviously supposed to convince you, the supposed simpleton watching at home, that it was Obama’s call to abandon Benghazi. That Hillary never in a million years would have sat still and abandoned Ambassador Stevens and the former SEALs in Benghazi with him. No, why she wouldn’t have cared what Obama said. She would have pounded the table and demanded that CENTCOM release Hades on those terrorist scum. In order to bring our people home.

Yep. That’s pretty much what this show is. I can’t wait for the email server episode. 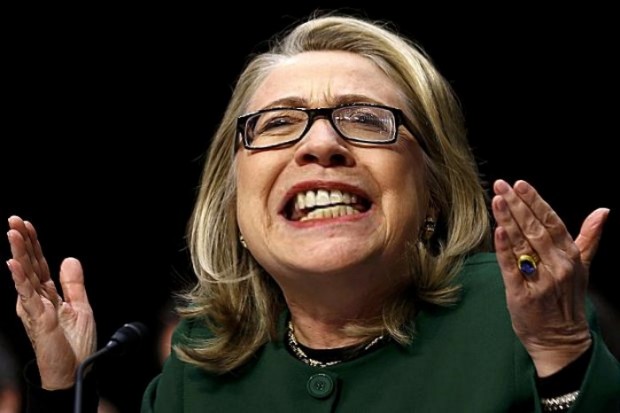