Oh look, another sports writer is deploying his deep understanding of the Constitution to chastise Americans over guns. Wednesday night, Sports Illustrated’s Peter King took to twitter to drop this gem:

Our supposed acceptance of murder is of course extremely hard to reconcile with the fact that we are one of a very few countries in the western, civilized world that still employs the death penalty for capital crimes like murder. Let alone the millions upon millions of dollars we spend incarcerating those who commit murder, even if they’re never executed.

(BTW, the best response to King’s initial tweet came from @GayPatriot: “Are you talking about #Planned Parenthood ??”)

When asked by twitter followers for his solution to the gun question, King responded this way: 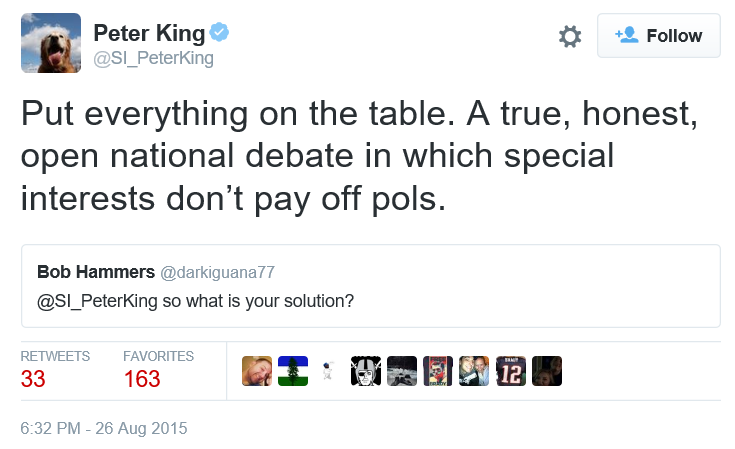 Surely King is referring to Michael Bloomberg and his $50 million dollar challenge to the NRA when he mentions “special interests who pay off politicians.”

In fact, I’m sure he’s not. Yet, what’s scary is King’s apparent belief that the 2nd Amendment is merely supported by “special interests,” as if the only thing standing in the way of the left abolishing the 2nd Amendment is that pesky NRA and their ability to buy politicians. If that were the case, then why wasn’t the left able to confiscate all guns during the first four years of the Obama Administration when they controlled all three branches of the federal government?

Hint: It’s not just about money. Oh, and stick to sports.

King specifically references the Newtown shooting in another tweet, as an example of how we just continue business as usual after these shootings occur. However, this is easily refuted as well. The Newtown shooting resulted in nothing short of a revolution in school security. Complete with everything from reinforced glass to electronically controlled entrances.

But none of this will matter to liberals like Peter King. Because to the left, taking your gun is the only solution.