Writers become oddly specialized in topics the more they write. Usually that’s a mixture of your own interests and stories you have to cover. I’ve focused on energy, Israel and even lefty protests.

But witchcraft? Apparently, I have to focus on that for a spell. (Boo!) Three years ago, I wrote about the culture in post-Christian America. I included the truly awful and anti-Christian TV show Salem in that cultural cauldron. Witchery abounded. 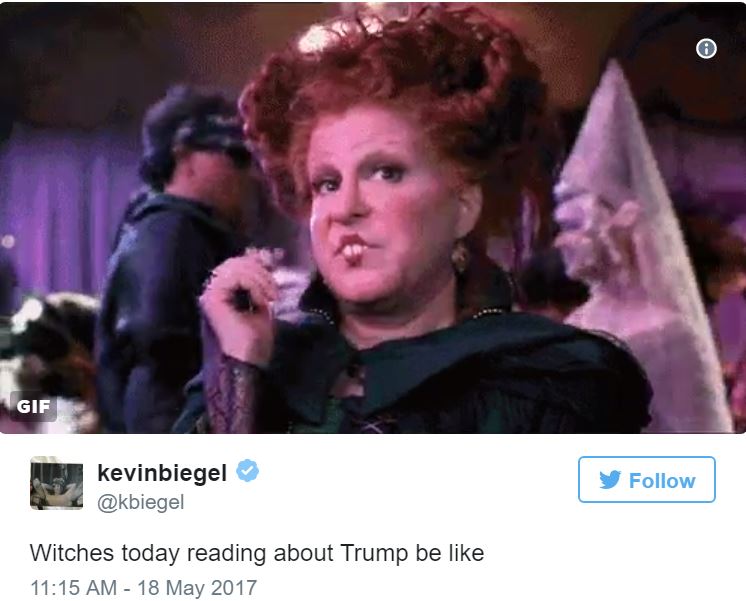 Early in the presidential campaign, I criticized the media for its attacks against then-candidate Donald Trump. I called it all part of the Modern American Witch Hunt and explained, “The media and the Left are going all-in attacking Republican presidential candidate Donald Trump, who committed the sin of saying something that upset them when he was discussing illegal Mexican immigrants.”

That assault looks mild compared to what we have now. Perhaps, I was peering into my crystal ball. I bring up my own past wizardry because Trump recently complained about the witch hunt against him and the media went utterly insane in response.

“This is the single greatest witch hunt of a politician in American history!” wrote Trump in a May 18 tweet. While history is replete with politicians the media have hated or that governments have killed, Trump’s war with media is different because there’s so much media attacking him.

And because the attacks are so nuts. The Washington Post responded to Trump’s complaint with an oped asking, “Is Donald Trump a witch?” It was an attempt at a humorous take mocking the president by showing others who have had it rough. Only no president has ever been the target of media and social media the way Trump is. Twitter, Facebook and the rest of anti-social media are at most 10 years old. While they were used against President Obama, he wasn’t vilified by the press the way his successor is.

The witch hunt proves Trump right. HuffPost followed his comment by talking to people who claim to be actual witches. “Twitter Witches To Trump: Don’t You Dare Compare Yourself To Us.” Yes, HuffPost is a member of the White House press corps (corpse?). The article informed readers that, “Witches lashed out at the president on #WitchesAgainstTrump and #TrumpWitchHunt after their identity was invoked.” In 2017, we are now worried about Witch Americans or perhaps WiccAmericans.

I weep for our nation.

The Los Angeles Times, one of the most prominent newspapers in the country, ran an oped on the issue headlined: “I put a spell on you, Mr. President.” This isn’t some crazy alt-left alt weekly. This is journalism, such as it is. The piece, by novelist and essayist Diana Wagman, alleged that Trump is the victim of spellcraft.

Actual quote one: “Thousands of witches, believers and people like me all over the world performed ‘A Spell to Bind Donald Trump and All Those Who Abet Him’ under the waning crescent moon last month,” wrote Wagman, hopefully before she sought psychiatric treatment. Though Wagman teaches creative writing, this appears serious. Actual quote two: “But before I lighted my candles, I researched binding spells. I didn’t want to send bad vibes into the universe.”

She went on to compare, “Spells, meditation, mindfulness, the oms I say in yoga, the prayers my Episcopalian family send my way” and even quoted quoted the Bible (Matthew 21:22 about receiving what you pray for if you have faith).  I guess she forgot Exodus 22:18: “Do not allow a sorceress to live.”

I could write endlessly about the alt-left’s abandonment of Christianity and its replacement with wicca, atheism, Islam or worship of the Flying Spaghetti Monster. But time’s a wastin’ and we need to get to the other crazy crud the left has gotten into in the past week. 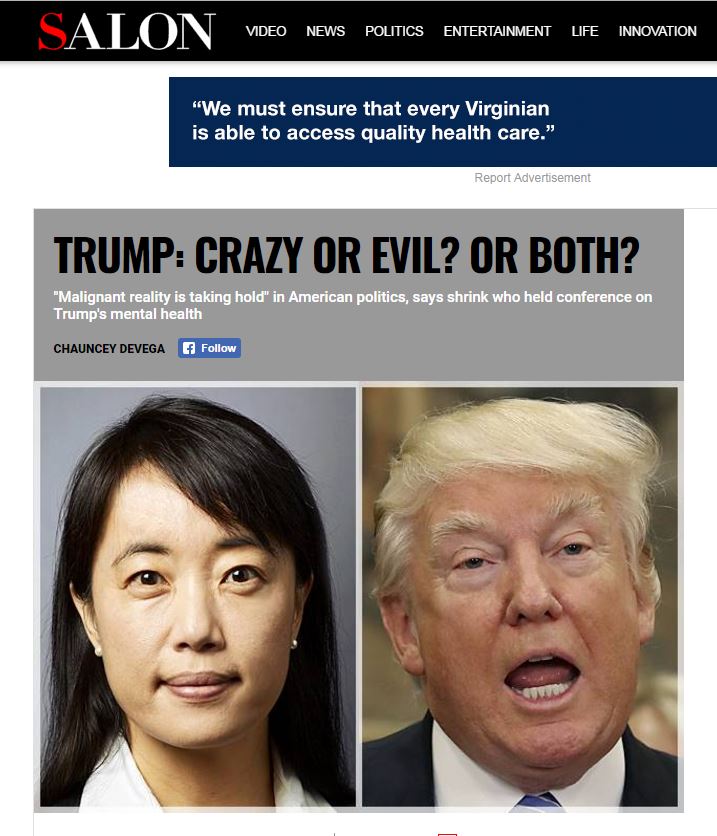 Calling Conservatives Crazy, Stupid, Racist and Evil SOBs: How often do you get repurpose something you wrote six years ago? If you are a writer, not often enough. This week is a twofer. Back in 2011, I wrote for Fox: “Conservatives are crazy. Sometimes they’re stupid, racist or even evil. On creative occasions they’re all four – at least that’s how they’re portrayed by the American media.” I am reminded how accurate this was on almost a daily basis. Thanks to our friends at Salon, we can see this deployed even today. Here we get the headline: “TRUMP: CRAZY OR EVIL? OR BOTH?” It cherry-picked two of the alt-left’s four horsemen of the apocalypse. The typical liberal argument continued with the subhead: “‘Malignant reality is taking hold’ in American politics, says shrink who held conference on Trump's mental health.” This is the latest in a series of ridiculous pieces by old reliable Chauncey DeVega. Chauncey isn’t subtle. Actual quote one: “President Donald Trump is a clear and present danger to the United States and the world.” Chaunce has all his media-approved talking points. Actual quote two: “Donald Trump would appear to be a 21st-century version of Richard Nixon.” He found a Yale psychiatrist who is, of course, just as hyperbolic as he is. Actual quote three from the psychiatrist: “In fact, a state of emergency exists and we could no longer hold back. We have an obligation to speak about Donald Trump’s mental health issues because many lives and our survival as a species may be at stake.” When people tell you Trump is threatening the survival of the species, it’s time to question their mental health, not his. 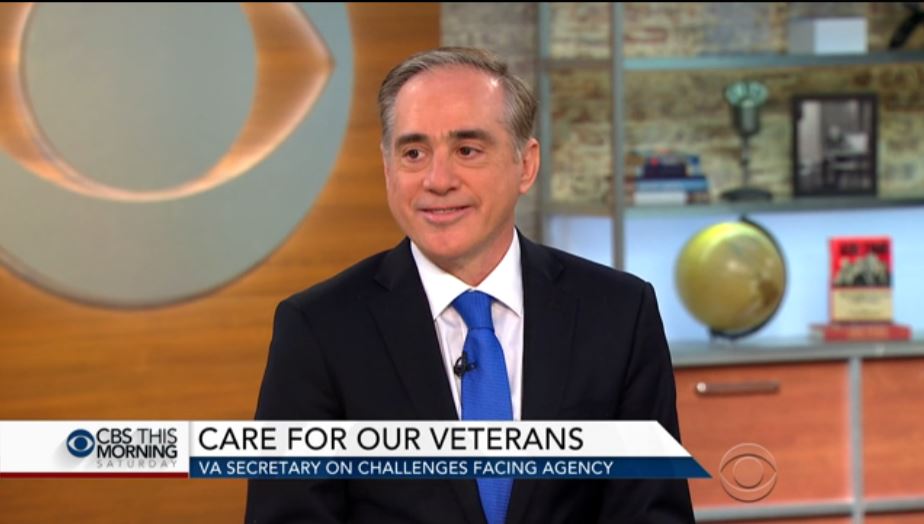 Everybody The Left Disagrees With Is Evil: The alt-left is all about hating their political opponents. They’ve mastered their history from places like Germany in the 1930s and that’s what they try to emulate. Since they hate the right so much, they spend every waking hour envisioning removing them from office. That leads us to Fusion (inbred sister to Deadspin and Jezebel) and its piece, “How Many People Have to Die, Resign, or Go to Jail Before a Good Person Is President?” According to this “news” site, “impeachment talk is in the air—frantically so in Twitter circles.” So liberals are talking about it and that makes it news? Actual quote one A: “Should Trump be removed from office, the president of the United States will no longer be a deeply bigoted dummy whose political instincts appear to be limited to self-aggrandizement and spite.” Yes, they hate Trump in a way that they never seem to hate Islamic terrorism. But it’s not just Trump, which takes us to actual quote one B: “Instead, the president of the United States will be a deeply bigoted zealot whose political instincts appear to be limited to a draconian interpretation of his Christian faith and a scorched earth approach to the social safety net.” The article proceeds to work through the line of succession, bashing everyone from VP Pence on down through the first 16 options. Only No. 17, Veteran Affairs Secretary David Shulkin, vaguely satisfies the alt-lefty contingent. Actual quote two: “Rather than ‘good,’ let’s call him a reversion to the mean of middle-of-the-road Democrats. This is certainly the best we could hope for in this lot.” This piece was written by Fusion’s Katie McDonough, who seems to have the political acumen of an empty soda can. The important thing about an article like this that is generally a waste of space is to remind weak-kneed conservatives who think the left and the media only hate Trump. News flash: They hate everyone on the right and a bunch of people in the middle -- anyone who opposes them on any issue. 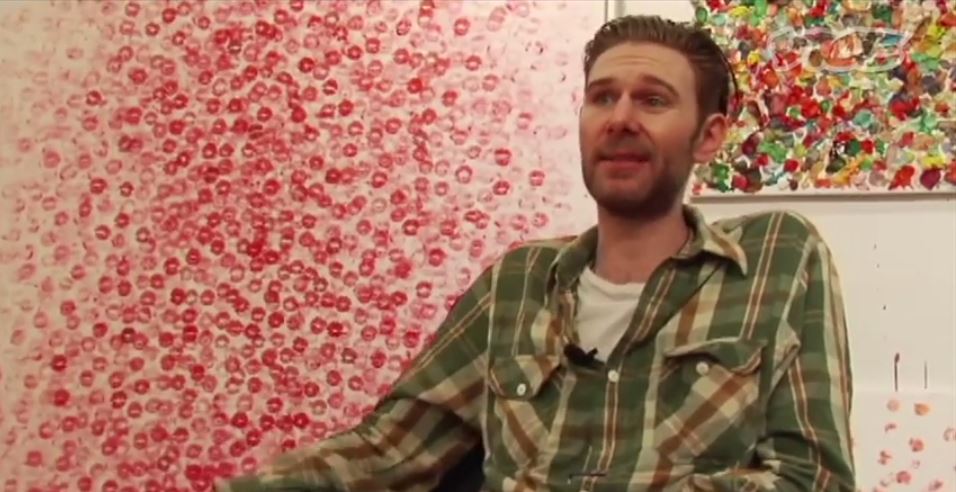 The Alt-Left’s War On Gum: Jezebel is ordinarily an extremist feminist site. But as part of Haim Saban’s wacky post-Gawker empire, it finds room to attack the evils of our world. Like Trump, Trump, Republicans and gum. Crazy Jezebel delivered an extensively researched piece headlined: “The Real Conservative Bubble: Why Are Republicans So Obsessed With Gum?” Good Lord, I wish I was kidding. The article begins complaining about how Rick Perry was chewing gum during the inaugural and whines about “our senile president’s face.” Actual quote: “When Perry decided to indulge on a wad during the inauguration, he made it clear that he’s unaware of the key factors that play into blowing the perfect bubble with your gum: its actual composition, the duration you’ve been chewing on it, and how skilled you are at making your lips resemble a tight butthole.” Ah, journalism. The article continued to whimper about Republicans’ “most beloved oral fixation” and mock anyone who chews -- from Sean Spicer to Tucker Carlson. The piece even went after Ivanka Trump because she and her husband collect art, including modern art. Actual quote two: “She has, in her apartment, a painting by Dan Colen; it is entirely made of chewed gum of all colors, shapes, and sizes, pressed haphazardly against a surface.” What our reportorial friends at Jezebel neglect to tell you is that a Colen bubblegum piece went for $578,500 at auction in 2014, according to The Wall Street Journal. While I personally prefer Renaissance art, Colen is welcome to send me one of his latest works so I can reconsider that stance. Meanwhile, I expect Jezebel and other alt-lefties to start calling modern art degenerate, just like their predecessors.

Notes: Love this TMZ headline that ran on HuffPost. Not sure which to blame, so I’ll let the chips fall where they may: Mike Pence Makes Notre Dame Graduates Walk Out on His Commencement Speech (VIDEO). I can just picture kindly VP Mike Pence chasing innocent Notre Dame students out with a broom or a chair. And, while I am fine if people accept their bodies (mine isn’t especially svelte), this Teen Vogue headline about a “body empowerment documentary” is classic: “It calls the overwhelming lack of body acceptance the biggest public health crisis of recent years in the United States.”