Fantasizing about someone’s death is always the best way to #Resist, at least in the mind of the deranged Hollywood elite.

Actor Jim Carrey took his new artistic hobby a bit too far when he drew a cartoon of President Trump’s sons being gored to death by an angry elephant. He tweeted the image on March 27, with the caption “#teamelephant.” Donald Trump Jr. and Eric Trump were depicted as bleeding with an elephant tusk protruding from each of their stomachs. 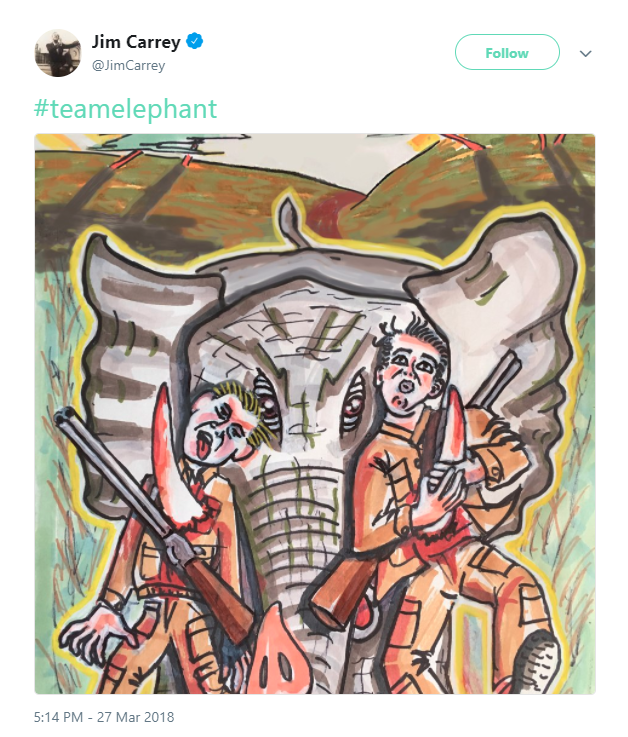 This came after the president allowed elephant trophy imports back into the country again in early March.

This is just one in a series of images Carrey has tweeted out, which include a grotesque portrait of White House press secretary Sarah Huckabee Sanders. In the tweet, Carrey called Sanders “monstrous” and a “so-called Christian.” Another image shows Donald Trump’s silhouette over a golf course scattered with the dead bodies of children. Carrey depicted Trump as saying, “What’s wrong with these kids? Didn’t they hear me yell fore?”

The painting idea isn’t exactly original – Rosie O’Donnell sells her etchings of a very orange Trump on Etsy for a whopping $125 apiece – but Carrey manages to cross the line between mildly amusing to offensive very quickly. His political paintings reach an audience of up to 18 million Twitter followers. And even amidst all his complaints against Trump being a member of the elite, his own net worth is at $150 million.

It should come as no surprise if Carrey’s work resembles  Kathy Griffin with his bloody image; after all, he encouraged Griffin back in the summer of 2017 to “hold up a severed leg as well.”