When a model accused the Star Trek actor of groping him in 1981, Takei denied  the allegations.. Less than a week later, on Tuesday, he focused his attention on lobbying for transgender bathroom rights instead, wearing a T-shirt with the statement: “You can pee next to me.” On social media, he posted an image of him wearing the shirt for Transgender Awareness Week. 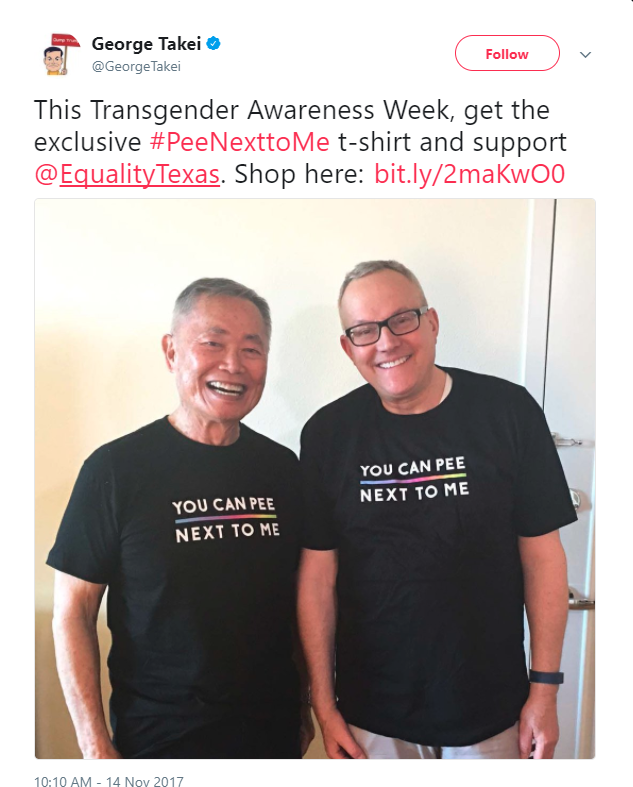 Followers found Takei’s photo to be in extremely poor taste, citing his allegations as a reason to avoid even being in the same bathroom as Takei. One Twitter user tweeted at Takei, “We haven’t forgotten what you did.” Another one tweeted, “Peeing next to you sounds dangerous.”

While Takei admitted on social media that he did not remember the incident alleged by the model, and denied it ever happening, an interview of his on The Howard Stern Show started to make the rounds in the media. In the interview, while Takei was talking about the Harvey Weinstein scandal, Stern asked him if he had ever sexually harassed anyone without their consent. When Takei remained silent, Stern said, “Uh oh. You’ve never sexually harassed anyone, have you?” Takei responded, “Some people are kind of...um...skittish. Oh maybe afraid, and you’re trying to persuade.”

In response to this sound bite, Takei released an explanation on Facebook, saying:

Many have raised concern over a back-and-forth between Howard Stern and myself, where we joked about me touching men during my Star Trek days fifty years ago. Out of context, I agree that the joke was distasteful, and I’m very sorry he and I made fun out of a serious matter.

For decades, I have played the part of a ‘naughty gay grandpa’ when I visit Howard’s show, a caricature I now regret. But I want to be clear: I have never forced myself upon someone during a date. Sometimes my dates were the initiators, and sometimes I was. It was always by mutual consent. I see now that that it has come across poorly in the awkward sketch, and I apologize for playing along with Howard’s insinuation.

Non-consensual acts are anathema to me and my personal code of conduct, and I would never do something against anyone’s will, period.

Takei also commented that “Russian bots” were responsible for circulating the story.