Jim Carrey: Americans May Have to ‘Struggle’ Like ‘People Did Under the Czar’

One has to wonder: Are some celebrities promoting communism in their anti-Trump rants? According to Jim Carrey, the hurricanes and politics are linked, “Trump is a fucking imbecile,” and Americans are going to “struggle” like “people did under the czar,” which, unless Carrey doesn’t know, means that his idea of “progress” is the tyrannical communism brought to Russia by Stalin.

Actor Jim Carrey recently made an appearance on Michael Moore’s Broadway play, The Terms of My Surrender. Before the stage appearance, he and Moore made a Facebook Live video together, discussing politics, especially the idea that Americans are going to struggle, “like people did during the czar.” Carrey also said he was grateful that “Trump is a fucking imbecile,” because it kept “people like Paul Ryan from taking everybody’s healthcare away, or passing initiatives that are devoid of compassion.”

Moore asked Carrey how he felt about the current political situation, to which Carrey replied, “I truly believe it’s all linked. All the politics, and all the hurricanes and all the stuff and the energy that is happening on this planet. It’s all connected in some way.”

Backstage, Carrey and Moore talked about Carrey’s blossoming, “Trump-inspired art,” including a painting of Trump as a killer clown. While Carrey showed that painting to the camera, he told Moore, “I actually painted this one after the election. It’s called, ‘There are killer clowns everywhere.’ And it was a prophecy, really.” 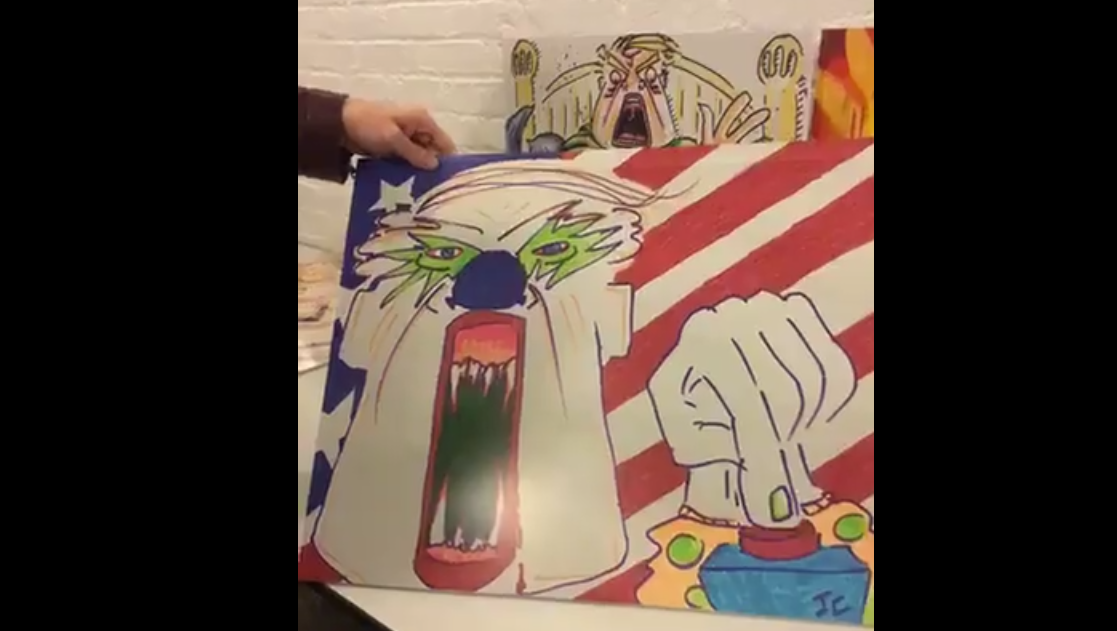 He then showed a painting of Trump severing the head of an eagle, covered in blood. Carrey said, “I believe the Russians made Trump an offer he couldn’t refuse, and the victim was American ideals.” 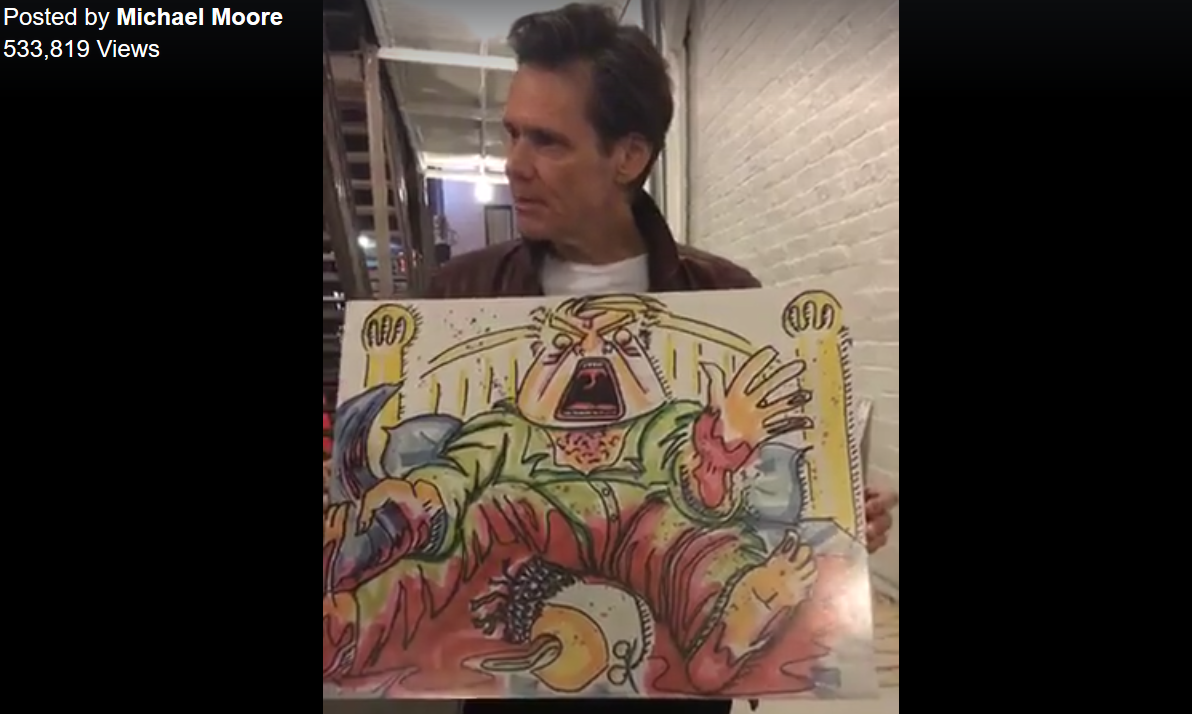 When Moore wondered if Americans were going to come out of the Trump era intact, Carrey responded, “I don’t know, but if we don’t, then there will be another form. You know, and we may have to struggle, like other civilizations have. Like you know, people did during the czar, and things like that. We may have to struggle, because we deserve it, frankly. So much of our culture is being held back in the stone age by greed. And everything in our culture seems to have behind it some greed motivation--profit motivation, that keeps us from going forward, keeps us from having alternative food, from wearing new things and having good schools.”

Carrey continued, “Trump is a fucking imbecile, and I’m kind of glad he is, because if he were somewhat efficient, he’d actually be passing some of this sadism that passes as legislation. I swear to God. I don’t like him, and I think he’s poisonous, an egomaniac and a lunatic, but I know that there’s another side to the story that balances everything, and it’s keeping people like Paul Ryan from taking everybody’s healthcare away, or passing initiatives that are devoid of compassion. Cruel, you know? Absolute cruelty.”

Moore then mentioned DACA, and the “800,000 who were going to be deported.” Carrey related this to his own personal immigration experience.

“There’s going to be so much pain over that. So much pain. I know what it’s like because I came over from Canada and I remember when I was in this country and I wasn’t documented. And it was no good feeling, thinking,  I’m an artist. If I say the wrong thing, or do the wrong thing, I’m not only going to get in trouble. I’m out. My dream’s over.  And so I was a dreamer. And I contributed to this society and this culture. I feel like I’m a pretty good part of it.”

Carrey then asked Moore to “talk about the war on intelligence in this country.” Moore stated, “I believe that the dumbing down of this country over the last three years contributed to the fact that we’ve got this guy. It kind of paved the way for him.” Carrey responded, “And 40% of the country is standing on the side of the railroad tracks cheering for the locomotive that’s about to run them over. Because they’re not looking. They’re not willing to at this point, there’s an ego thing going on that might not… We love them too, I love them too. I just want them to wake up and see what it is. And it’s not a battle. And we are going to be able to disagree with each other without hating each other.  People need to learn the difference between disagreement and hatred.”

Michael Moore then said, “I’m a big believer in redemption and people can change their minds and they can come away from that mean angry place, and come to a better place.”

To which Carrey responded, “You’re a champion of that.”

In People, David Quinn reported that Carrey’s thirty-minute spotlight on stage was roughly the same material, but with a more existential bent. “The fact is, going down the river of sorrow and suffering is the way to freedom,” he told the audience. “I’ve gone through it and I’m telling you, you don’t survive it. You don’t come out of it on the other side. You might come out of it with a body, but there’s no you attached to it. It’s tough to be yourself if you don’t have a self.”

In reference to the Trump election, Carrey said, “They say that the best trick the devil ever did was convincing people that he didn’t exist, but I think the best trick was convincing 40 percent of the country that this truffle pig who spends half of his presidency gargling caviar behind the wheel of a golf cart isn’t the elite,” he told the audience.

According to Celebrity Net Worth, Carrey is worth $150 million. Somehow, he’s not a member of the elite, in his own opinion.