‘The Atlantic’s’ Litany of Racist Sins: Being White Is a ‘Bloody Heirloom’

Race relations and identity politics are what drive some people to make some unbelievable judgments on the United States. Long before the Charlottesville incident in August, the left has slimed the right at racists and white supremacists.

In The Atlantic, an essay by National Correspondent Ta-Nehisi Coates, with the headline, “The First White President,” was published this week. Coates, of course, is a man so blinded by his own rage-addled racism that he declared the cops and firemen who died in the 9-11 attacks “were not human to me.” An excerpt from his new book, We Were Eight Years in Power, the essay detailed the sins of white folk in politics since 1776. 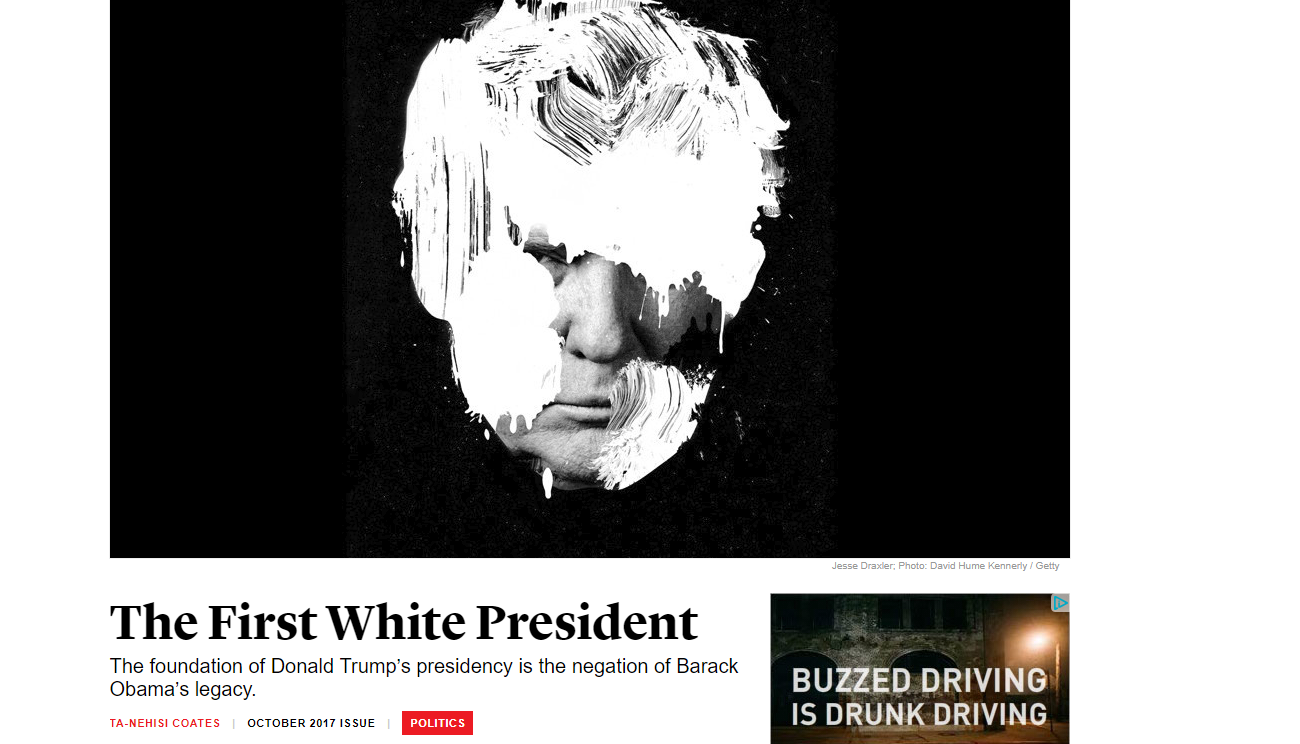 Coates referred to the supposed stigma of being white as the “bloody heirloom,” something that apparently no white politician can shake off. (It’s not exactly something that can be surgically removed.) And while Trump is, in his opinion, the ultimate negation of the legacy of Barack Obama, everyone, liberals and conservatives alike, is at fault for promoting blatant racism in the political world.

It began “with Virginia slaveholders claiming that Britain sought to make slaves of them.” Coates’ opinion on historical conflicts is that if there was a grievance, it could be compared in relation to slavery. There is no grey area in history: either a group was fighting off slavery, or it wasn’t.

While the rest of American politicians, from 1776 onward, made use of the “passive power of whiteness” to achieve their public positions, at least, according to Coates, they had other recommendations to power. Not so with Trump: his “ideology is white supremacy, in all its truculent and sanctimonious power.”

Liberals are at fault even more so than conservatives, because while conservatives--especially the working class--promote white supremacists, liberals fail consistently, in Coates’ opinion, to point this out. Instead, white working class people, a group that is “imagined,”  are pitied, while black people are allegedly ignored. “That black people, who have lived for centuries under such derision and condescension, have not yet been driven into the arms of Trump does not trouble these theoreticians,” said Coates.

And while not every Trump supporter is a white supremacist, they are complicit in the “ideology,” because they “felt it acceptable to hand the fate of the country over to one.”

“Racism remains, as it has since 1776, at the heart of this country’s political life,” Coates generalized. However, while he stated that Trump supporters were mainly white, with a higher average income than minorities, he failed to take into account that, at least according to the 2016 census, the United States’ population is actually 76% white people. That doesn’t mean that whoever the white people vote for will be a white supremacist. It’s just numbers.

Coates said that the only reason Obama supposed left the presidency with the country more divided than before was because “most Americans identify as white.” Of course, it had nothing to do with Obama’s overreach of the executive office’s powers, (thus resulting in DACA), or his poor foreign policy execution (remember the “apology tour?”)

But Coates will never find anything wrong with the Obama administration. In the past, he has even said that Obama’s “belief in the heart of white people blinded him to believe in the appeal of Trump.”

Americans are sick of identity politics, it’s true. But that doesn’t make the entire white population complicit in racism.