There seems to be no bar to the crazy this week in the aftermath of Charlottesville. While critics are screaming at Trump’s suggestion that, after the Confederate monuments the left may go after the Founding Fathers, the fine people over at Newsweek are actually considering it. Not insane enough? Vice wants to “Blow Up Mount Rushmore.”

America-hating lefty Wilbert L. Cooper at Vice stated in his article, “Fact is, I'm not sure there is any American president worthy of being etched into the side of a 60-foot mountain with explosives and jackhammers. I mean, every single one has at least been partially complicit in horrific atrocities.” 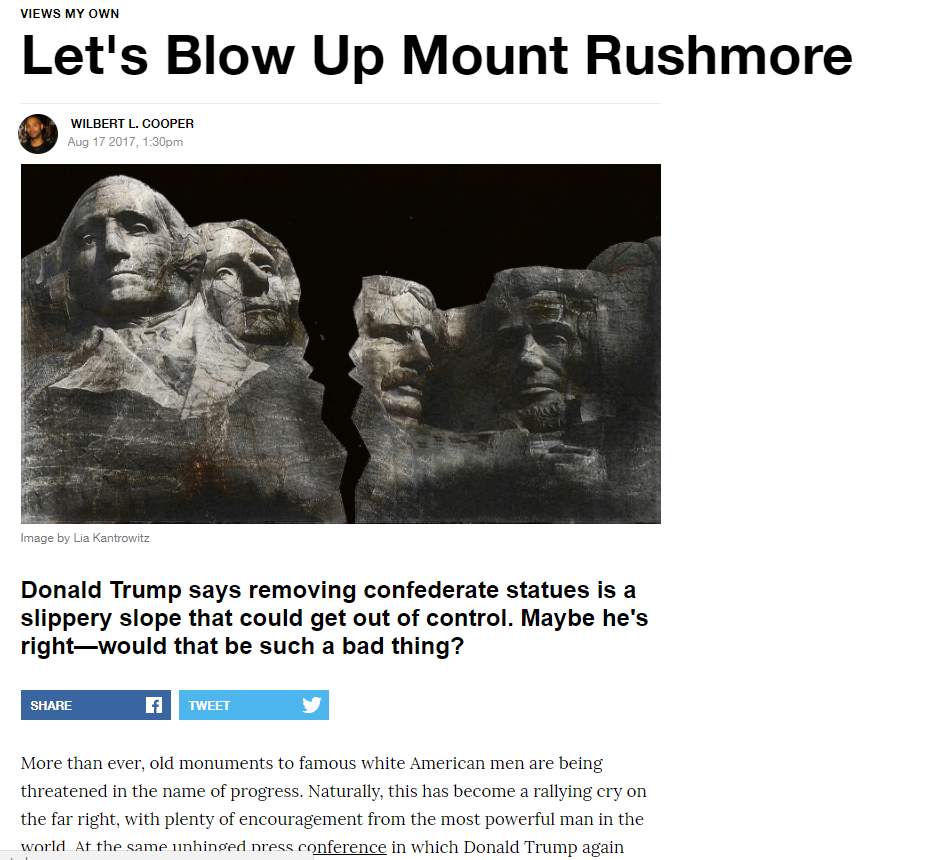 Not even President Obama? The hero of the left?

According to the Wall Street Journal, Vice Media is currently valued at $5.7 billion. That's a massive outlet for the kind of anarchist terrorism they are advocating in their headline. Not to mention, the rest of the article is absolute filth that attacks every single president.

The headline was so bad, even Vice took it down after a couple of hours. They left a note: "We do not condone violence in any shape or form, and the use of "blow up" in the original headline as a rhetorical device was misguided and sensitive. We apologize for the error."

In Newsweek, Michael Dorf, a professor of Law at Cornell Law School, wrote an opinion piece with the headline: “Should We Tear Down Statues to Slave-Owning Presidents?” In the article, he stated, “I am not sure that there is any truly persuasive reason for retaining monuments and other honors to the likes of Washington and Jefferson.”

While Dorf, in Newsweek, did state that, “We honor Washington and Jefferson despite the fact that they owned slaves,” he also argued that in Germany, no one honors Hitler and Goebbels of World War II, but instead they merely teach about that era as past. Yep, that’s right, he just compared our founding fathers to Hitler and Goebbels.

After all, “Surely slavery, like genocide, is the sort of enormous evil that warrants purging.” With that kind of logic, the constitution warrants purging, and anarchy should reign. Because a republic founded by the slave-owning forefathers is racist.

Dorf was held back from any more statements, weirdly, by the production of Hamilton on Broadway, which has a “cast [that] overwhelmingly consists of people of color.” Which for him makes an argument that at least, for now, makes a “key distinction between Confederate heroes and Revolutionary heroes.”

Vice handled things a bit differently. Cooper stated (classily) at the end of his article: “Demystifying the historical figures of the past, pulling them off the great mountain top back down to Earth where they shat, farted, spit, pissed, fucked, raped, murdered, died, and rotted seems like important business for this country. As long as we allow those men to be cults of personality who exist beyond reproach, we're never going to be able to see them for all of their good and all of their evil.” (Again, even Barack Obama?)

Say a prayer for the sanity of the left.