The song has “trenchant lyrics about police brutality” that are “as unsettlingly relevant today as they were in 1988,” according to the writer. BET found it appropriate for the present as well: they made an entire episode of Tales that centered around the controversial lyrics by depicting a dystopian society that is heavily segregated. 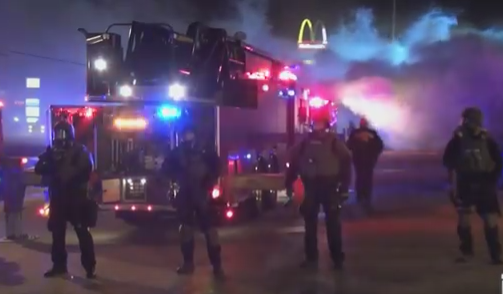 The only difference? BET decided to make the society racist against white people. In an attempt to emphasize the supposed reality of the racism that both Saraiya and BET find to be rampant in America, the story turns the tables. Following in the footsteps of political rappers’ efforts to make it seem like America is a police state, where anybody can be brutally gunned down for expressing an opinion, the episode builds a dystopian fantasy.

Or is it even a fantasy? If one chooses to believe Saraiya’s opinion, “through the lens of oppression these structures are close enough to what we impose on our black citizens that most of the time, “F--k tha Police” is disturbingly recognizable.”

She found the elements of the story, specifically the harassment, violence, and impunity, as well as the amount of people who are not “willing to risk their privilege to help,” relatable to modern times. The whole story is, according to her, “surprisingly effective.” Really? Has it really done that much in the little time it’s been on the air?

The main white character, who is lynched in the plot, is Caitlyn Jenner’s son, Brody Jenner, is supposed to be the white mirror image of the oppressed black man. (Why they picked a member of the group clustered around the Kardashians is anyone’s guess.) The episode ends predictably, at least, for those who are familiar with the Black Lives Matter complaints: “with a triumphant acquittal for the cops and a furious, frustrated protest from the oppressed.”

Why is it that no one realizes a real police state would take away anything complaining about it?