Another actress supporting Planned Parenthood? Not surprising. But did the actress miss the memo when she posed with her newborn infant to support the institution?

Amber Tamblyn, best known for her role in The Sisterhood of the Traveling Pants, has recently attempted to follow her female colleagues in Hollywood by reinventing herself as an activist, but her latest effort to join the trend seems to have some hidden irony to it. 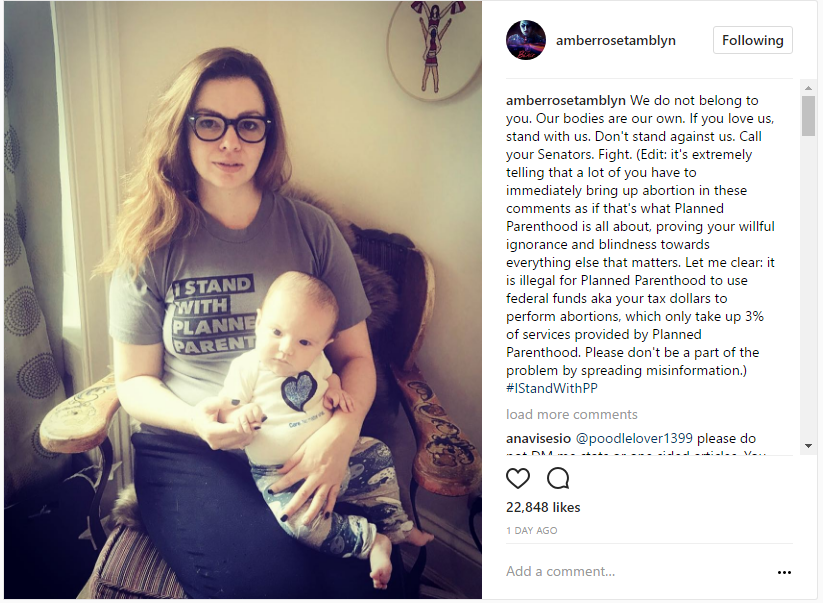 Wearing a grey t-shirt emblazoned with the logo, “I Stand With Planned Parenthood,” Tamblyn posed with her infant daughter and captioned the photo with: “We do not belong to you. Our bodies are our own.” It was then posted to Instagram. She later left an edit which seemed more like a tirade, but her edit accidentally made a point that Planned Parenthood must not be happy about.

She just admitted that it was illegal for Planned Parenthood to use federal funds. Regardless of her parroting the lie about the services offered by the institution, that statement is almost damning. The Washington Post debunked that myth about Planned Parenthood’s services in 2015, and even Slate called the statistic Tamblyn quoted “the most meaningless statistic ever.” Considering that from 2015 to 2016 Planned Parenthood performed 323,999 abortions according to its own annual report, while only providing 9,419 prenatal services and 2,889 adoption referrals, both Tamblyn and Planned Parenthood have the wrong facts.

And maybe it wasn’t so smart for Tamblyn to use her baby as a prop for Planned Parenthood.